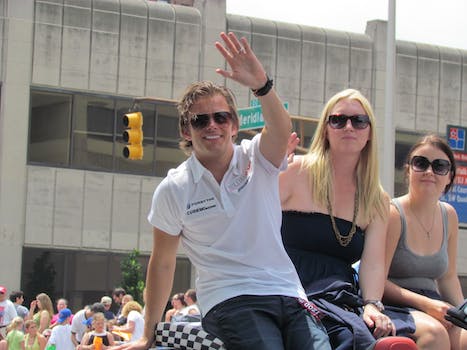 After IndyCar racer Daniel Wheldon died in a horrific accident Sunday, fans took to Twitter and Tumblr to mourn.

IndyCar driver Daniel Wheldon died in a horrific racing accident Sunday in Las Vegas and fans are taking to Twitter and Tumblr to remember him.

Wheldon, 33, was involved in a 15-car accident that forced his car airborne. It crashed into a safety barrier. The 16-time IndyCar race winner was airlifted from the track and taken to a nearby hospital where he died from his injuries.

The English driver has topped the trending charts on Twitter since Sunday night. Twitter users have mentioned him more than 80,000 times since about 7 p.m. ET.

“I have so many good memories of racing with Dan in the early 90’s, a true fighter. We’ve lost a legend in our sport but also a great guy,” tweeted Formula 1 driver Jenson Button. “I can’t begin to imagine what his family are going through and my thoughts are with them at this very difficult time.”

The crash left a catastrophic trail of debris on the track.

“I’ll tell you, I’ve never seen anything like it,” said racecar driver Ryan Briscoe, according to USA Today. “The debris we all had to drive through the lap later, it looked like a war scene from Terminator or something. I mean, there were just pieces of metal and car on fire in the middle of the track with no car attached to it and just debris everywhere.”

When news of Wheldon’s death reached the Las Vegas Motor Speedway on Sunday, thousands of fans, drivers and pit crew members could not hold back the tears.

“Our thoughts and prayers are with his family today. IndyCar, its drivers and owners, have decided to end the race,” said IndyCar Series CEO Randy Bernard following the news, according to ESPN.

On Tumblr, hundreds of people have been sharing photos of Wheldon (montage, as a young driver) and mourning his loss.

“I hate it when race car drivers die. They do it because they love it, but it should never, ever end like this,” Laerwen wrote on Tumblr. “Rest in peace, Dan Wheldon.”

Wheldon is the second driver to die in an IndyCar accident since 2006, according to ESPN.