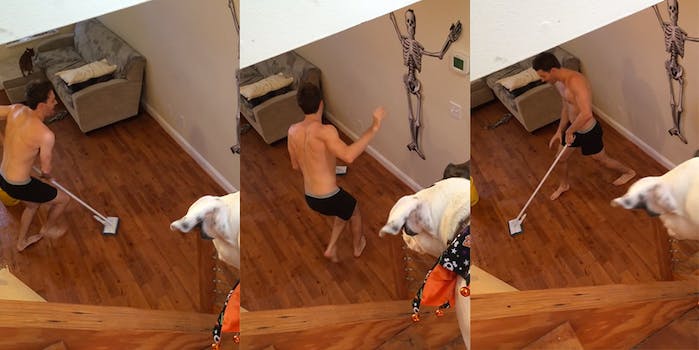 As anyone who spent his early postgrad years living in a beer-soaked dude den could tell you, making sure the house gets cleaned isn’t the easiest task to accomplish—especially after Halloween parties. (I woke up Saturday morning to find someone had fake-tattooed a skull-and-crossbones on my coffee table.)

If only every roommate could be like Baltimore’s Jimmy Pope, whose roommate Justin Chen discovered him mopping the floor in his underwear, singing and dancing to Sheena Easton’s “9 to 5,” the morning after a Halloween rager. The clip blew up on Facebook and Reddit, collecting millions of views. And now Pope has to field a flood of messages on his Facebook wall like “you can clean my house like that anytime.”

Pope looks embarrassed that he got caught, but my cynical heart says the whole thing was set up. Two reasons: 1) no one enjoys cleaning that much, and 2) people are already commenting on his wall to say “Big things in the works!!! Stay tuned!!” and “Follow Jimmy Pope and Justin Time Chen for more exciting news!” Maybe we’ll get a whole webseries of Pope dancing and cleaning half-naked to various songs. Maybe he’s launching an Uber for dancing half-naked housecleaners. Either way, Pope has a lot of new fans who won’t go disappointed.