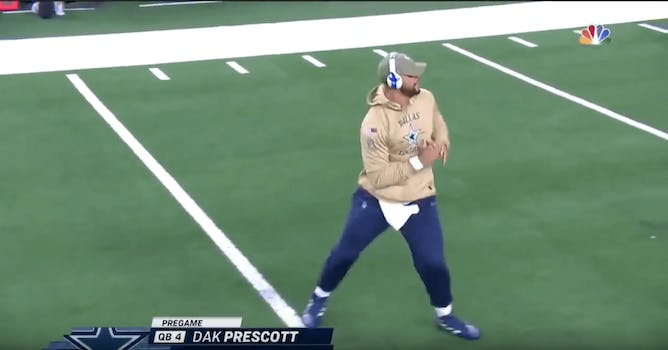 #DakDancestoAnything is winning the internet.

Prescott’s moves include a hip whip and twisting motion that is meant to open up his hips (where the quarterback gets most of his power). It gets the job done—and it’s hilarious to watch.

Many found that the quarterback’s moves resembled a dance routine and within moments, the #DakDancestoAnything meme was birthed. Fans added music to the video of Prescott getting warmed, and tweets showed him “dancing” set to “Hips Don’t Lie” by Shakira, Elvis Crespo’s “Suavemente,” Beyoncé’s iconic “Single Ladies,” and more.

Hector Diaz, a producer for SB Nation, shared a video of “Dak dancing to Suavemente.”

“The collab we never knew we needed @dak @shakira,” user @itsmattcummings tweeted along with the viral hashtag.

Though the Cowboys lost their game to the Minnesota Vikings (24-28), it’s clear that Dak Prescott’s warmup moves are winning the internet.