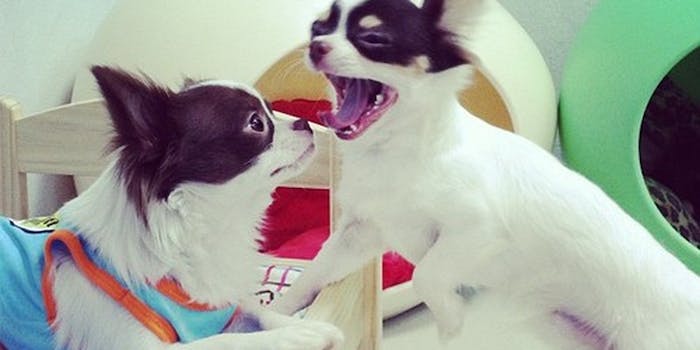 Both Colin and Clay sought to avoid sleeping in the hotel cot.

Dog brothers Colin and Clay had what witnesses are calling an “uncomfortable” shouting match over who got the comfy bed at a hotel last night. The two puppies are currently traveling with family, and checked into a hotel in Keystone, SD around 7 PM last night.

All was quiet until the puppy’s bedtime two hours later, then, according to witnesses, the brothers began to bark and yip at each other.

“It was very disruptive,” said Tom Cranston, whose room was two doors down. “They were really going at it. I almost complained, I really almost did.”

The dispute reportedly arose over who got to sleep in the bed, and who had to sleep in the cot brought up to the room by housekeeping. Eventually, the fight was settled when the puppies’ parents retrieved sleeping bags from the car and made both dogs sleep on the floor.