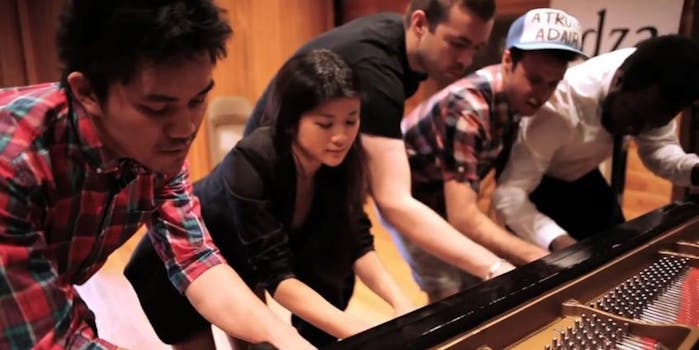 Watch 5 pianists “Get Lucky” at the same time

We’re sorry in advance for putting that ubiquitous Daft Punk song back in your head. Trust us. This is worth watching.

YouTube’s favorite experimental music collective, CDZA, tried the many-hands-to-one-instrument approach to their YouTube cover of “Get Lucky,” which they’ve called “Daft Pianists.” Five members of the New York City group bash out the tune on the ivories, starting with just one musician and gradually building to a multi-layered take on the worldwide hit.

It’s perhaps not quite as inventive or novel as Walk Off The Earth’s five-people-to-a-guitar take on Gotye’s “Somebody That I Used To Know,” but darn if it isn’t more fun. It’s stuck at 301 views on YouTube, a sure sign the clip’s going viral. Best to watch it now so you can tell all you friends you were there first, man.