Why dad humor is having a moment right now

Everyone wants in on it.

At 10:45 at night, sent from a Yahoo Mail account on an Android phone, with no follow-up and no explanation, my dad asked in an email, “Whatever happened to… pudding?” 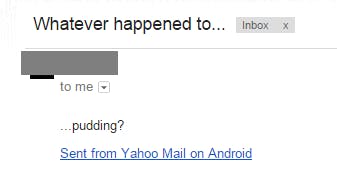 It is the funniest thing I have ever read. It’s also a beautiful example of the specific brand of dad humor that is totally having a moment right now.

A major disclaimer here: I am the cofounder of Dad Magazine, an esteemed publication about cool dad stuff. I tap into the zeitgeist once a month in a parody series for the Toast. What inspires me? Dad Twitter, a scene that comprises “dads who tweet about dad stuff: e.g., babies, errands, sweaters, and the like,” as Vanity Fair describes it. It even has its own “master of the form” in startup mogul Anil Dash. Dad Twitter has its own list to follow. There’s a “Dad Jokes” subreddit. Last week, the Verge argued that #brands are killing the “dad joke,” taking the honest and irreverent and making it “weaponized” to sell products.

Everyone wants in on dads.

Two days later, at lunch, my dad lamented that all pudding comes in cups now. What happened to the homemade, stovetop pudding of his youth? he asked.

The whole exchange was brutally sincere to the point of philosophical. It was extremely strange. It was, sure, “random.” If that description sounds familiar, it’s because it’s also the criteria for a joke in the avant-garde comedy world of Weird Twitter. Yes, dads are the Weird Twitter of the meatspace. Or maybe Weird Twitter is just trying to get on Dad’s level.

actually, Bon Jovi is the name of the BAND. you’re thinking of Bon Jovi’s monster

On (Internet) paper, the two seem similar. Both dad humor and Weird Twitter come out of left field; both often leave you laughing against your better judgment. Both work with this vibe of not-quite-getting-it. Both are, of course, profoundly weird.

But earnestness is to dad humor what obliqueness is to Weird Twitter. On Twitter, jokes are cloaked in eight layers of irony—it’s hard to tell what the jokester’s angle is. You’re left searching for a motive.

Dad humor has no edge, no agenda other than laughter and groans. It comes from a place of purity and maybe slight ignorance. Often there are puns involved. Dads send you emails about dessert in the middle of the night, or build elaborate traps to keep squirrels from eating the bird feed, or argue with smoke detectors. It’s inspired in its hilarity, but—this is where Weird Twitter falls short—real dad humor is also completely natural. Your dad would make the “four eels” joke if he knew of Outkast, and he wouldn’t need to performatively post it online either.

I’m sorry Ms. Jackson (Oooooo)/ I am four eels/ Never meant to make your daughter cry/ I am several fish and not a guy

What dads are going for isn’t Internet fame or popularity, it’s honest human connection. Frankly, it cannot be “weaponized” by brands or posers. Giving dad humor a motive other than pure humanity strips it of its dadness.

Dad culture is Weird Twitter with the masks off. It exists for the post-irony, “no-haters” Internet. It’s not that Weird Twitter can’t be earnest, but that we’ve been burned too many times to ever be sure.

(Did the “four eels” guy, jnalv, honestly think “four eels” was funny, or was it designed to go viral? Is this account a ridiculous bot, or a branded piece of performance art? Can I make a connection here, or am I going to be outed as the one who wasn’t in on the joke?)

It’s true that not every dad is a good dad. There are deadbeat dads and abusive dads, dads who weren’t there and dads who left us with deep scars in our hearts. But with the good dad, the ideal dad embraced by this zeitgeist, there is no joke to be “in” on. There’s just a benevolent figure we can trust.

I like that Lord of the Hobbits movie where the hairy dudes trudge around for 3 hours.

If that sounds too cheesy, it’s on purpose. Displaying sincerity can feel like a radical act. To say you unabashedly like something, whether it’s Top Gear or Katy Perry, meticulously organizing the fridge or watching NOVA, takes strange courage, especially when you’re young and the pangs of being a social outcast don’t feel far behind. After all of the attempts to be interesting and cool, that permission to be yourself and unashamed of it is what we’re all chasing. 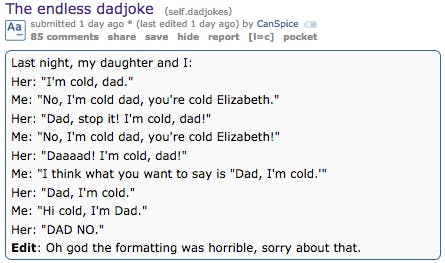 Many of us will never be entirely confident in adulthood. We can contribute to IRAs and buy homes and have kids, and still feel like frauds. But the dream of the dad is someone who has stopped giving a fuck about all that. Someone who is the model of how not to try, how to just be, who doesn’t understand why you’d make fun of him for wearing socks with sandals, who makes you the weird one for thinking it’s an issue. And maybe by making jokes like them, we can capture the same spirit.