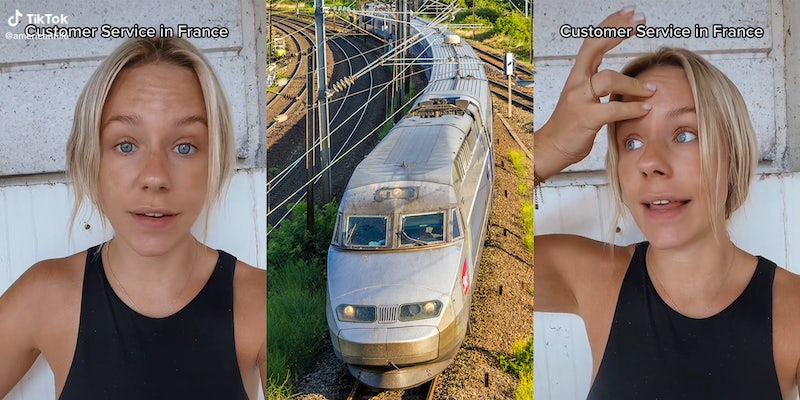 ‘Whenever there’s an opportunity to be kind, helpful, understanding, they choose the opposite’: American calls out ‘cold’ customer service in France, sparking debate

'Being forced to be nice to Karen’s in USA I feel bad for the workers who get walked on.'

There’s a major cultural divide between French and American customer service, often remarked upon by American visitors in France.

While Americans expect cheerful, helpful experiences with people working in shops and restaurants, this isn’t the norm in a lot of European countries—and French customer services workers are often stereotyped as standoffish and rude. This issue is sparking debate thanks to an American TikToker posting about her experiences living in Paris, expressing frustration with French customer service.

TikToker Amanda Rollins (@americanfille) went viral this week with a video about her attempts to catch a train to Bordeaux, interrupted by a ticket collector who eventually prevented her from getting on the train. The comments section blew up with similar complaints about customer service in France—although some people were critical of America’s overly cheerful attitude.

“Whenever there’s an opportunity to be kind, helpful, understanding, they choose the opposite,” said Rollins, adding that the thing she missed most about America was customer service.

While she acknowledged that this was a widely recognized cultural difference between American and French expectations, she went on to explain that French customer service had caused a serious inconvenience for her that morning. She wound up missing a train to Bordeaux due to a standoffish ticket collector saying she was too late to get on—even after her ticket had been scanned and she was standing outside the train doors for several minutes.

“He had every capability to let me on, there was plenty of time,” she said. “And I think he just enjoyed saying no. In the U.S., they would’ve done everything possible to let me get on.”

Some commenters argued that it’s typical for French trains to stop letting passengers board a couple of minutes before departure. However most responses were sympathetic, commiserating about “cold” customer service in France and other European countries like Germany and Spain.

“As a french person I am also tired of it,” reads one of the top comments. “Can’t stand it.” Another complained: “Sometimes I feel like they *enjoy* saying they can’t do it. Americans who don’t actually live here don’t get it.”

“In France we tend to forget the « service » in customer service,” joked another.

However some people did come to the defense of rude customer service workers, with one commenter arguing, “Honestly love it…. Being forced to be nice to Karen’s in USA I feel bad for the workers who get walked on.” While Americans can be frustrated by the less friendly customer service traditions in other countries, the opposite is sometimes true for people visiting the U.S. overseas, with some people finding American customer service unnervingly enthusiastic or disingenuous.

The Daily Dot has reached out to @americanfille for comment via email.

Update Sept. 14, 2022, 12:13pm CT: Per @americanfille, who responded to the Daily Dot via email: “I’m not surprised that TikTok took off as most of my viral videos are centered around the polarizing cultural differences between France and the U.S., specifically the ones that are controversial—though that wasn’t my intention when posting it lol, I was just frustrated. I have to walk a fine line living abroad because on the one hand, there are so many things that make 0 sense to me (and even dare I say, seem wrong), but on the other hand, I signed up to live in a foreign country and submerge myself into their culture. It would be naive to expect things to be the same in France—and I know that. But there are some things that I don’t agree with, such as the lack of customer service.

Service workers in France are paid a livable wage, so there are no tips to incentivize them to be overly friendly and helpful (a stark contrast to what we see in the U.S.). But it goes beyond that—French people seem to start on the defensive side and then progressively warm up (sometimes). A big argument I see is that Americans are way too friendly, appearing fake—which is partly true. This is one of the topics I’ve had the hardest time pin-pointing because it goes so much deeper than just ‘French people are mean, Americans are fake.’ The French are more direct, and they do not jump out of their seats to be helpful when they’re on the clock.”