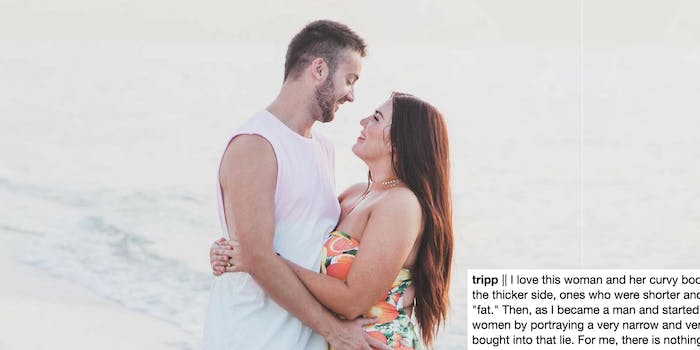 A picture says 1,000 words, and an Instagram caption might tack on another 300, but it takes one truly self-indulgent bro to write an “inspirational” post that somehow conveys a much more pathetic message entirely.

Much of the internet is praising Robbie Tripp, a public speaker and writer, for a seemingly precious Instagram post he made about his wife, Sarah Tripp—well, about Sarah’s body, specifically. In the post, Tripp writes about how he grew up being teased about his attraction to “girls on the thicker side,” who “basic bros” might call chubby or fat.

And while Sarah might not got a spot on the cover of Cosmopolitan, Tripp writes, he loves her for her figure, and wants other women to know they don’t have to change to be considered beautiful—”There is a guy out there who is going to celebrate you for exactly who you are, someone who will love you like I love my Sarah.”

|| I love this woman and her curvy body. As a teenager, I was often teased by my friends for my attraction to girls on the thicker side, ones who were shorter and curvier, girls that the average (basic) bro might refer to as "chubby" or even "fat." Then, as I became a man and started to educate myself on issues such as feminism and how the media marginalizes women by portraying a very narrow and very specific standard of beauty (thin, tall, lean) I realized how many men have bought into that lie. For me, there is nothing sexier than this woman right here: thick thighs, big booty, cute little side roll, etc. Her shape and size won't be the one featured on the cover of Cosmopolitan but it's the one featured in my life and in my heart. There's nothing sexier to me than a woman who is both curvy and confident; this gorgeous girl I married fills out every inch of her jeans and is still the most beautiful one in the room. Guys, rethink what society has told you that you should desire. A real woman is not a porn star or a bikini mannequin or a movie character. She's real. She has beautiful stretch marks on her hips and cute little dimples on her booty. Girls, don't ever fool yourself by thinking you have to fit a certain mold to be loved and appreciated. There is a guy out there who is going to celebrate you for exactly who you are, someone who will love you like I love my Sarah. || photo cred: @kaileehjudd

The photo and caption have made the media rounds from Metro to Mic for its inspirational messaging, and tens of people have cheered the Tripps online for their body positivity. But a lot of others have, understandably, criticized Robbie for the post’s performative nature—for emphasizing just how “not basic” of a bro he is for accepting a woman as she is, and how much more elevated he’s become as a human and feminist for choosing to marry a woman with curves.

At first glance, the messaging behind this photo is positive—Tripp is celebrating women for who they are, and expressing his love for his wife. However, his message is tinged in problematic language. Tripp loves that his wife is curvy, but fails to even acknowledge the body positivity movement that his post represents by insinuating that “chubby” and “fat” are insults, instead of descriptors that people have begun to re-appropriate and embrace. He makes a big fuss over her physical attributes and tells women to find a man who is attracted to them, as if what women look like and having a partner defines their value.

“You’re trash. Must’ve been SO hard to be attracted to these women who had it ten times harder than you’ll ever know, but here you go making it all about you and stripping the idea of feminism that these confident women represent,” one person commented.

“Dude, can’t believe how many people are buying this shit. You have no idea about feminism. Typical Instagram famous douche. Not one mention about her personality,” chimed in another.

Other people took issue with Tripp’s message for other men to not “buy into the lie” of thin women being the only kind of women acceptable to find attractive. While it’s definitely a message projected through advertising and entertainment, the fact that Tripp made the distinction that “real” women are fat and completely focused on Sarah’s physical attributes didn’t impress a few followers.

“I caution to watch out for the use of the term ‘real’ or comforting women by saying that we will find a man to love us for who we are one day, as if this is our life goal,” one commenter stated. “All women are real, our curves or lack there of are real, and we should first love ourselves before we expect a man (or woman) to love us back. I love that you love your wife this much. Thick or not, all women are beautiful.”

“Lol but like this somehow still reeks of objectification,” another commented. “Women > their bodies…I agree who cares about size, and this post is great for empowering women who are bigger but empowering them how and for what, to be another desirable object for a man?”

Ultimately, Tripp’s entire post appears to champion the fact that he’s attracted to fat women—excuse me, curvy women—and exudes the energy of someone hoping to be praised and celebrated for being a decent human being who isn’t fat-phobic. Like many feminist men who have made this mistake before him, and many who will after, Tripp’s focus on his own excellence and “good guy” nature comes off as masturbatory instead of celebratory of the woman he’s posting about. He doesn’t elevate Sarah, but instead objectifies her to put his own actions on a pedestal for other men to emulate.

Sarah herself doesn’t seem to mind. In a response on her own Instagram, she thanked people for the kind emails and messages that the couple has received in the wake of Robbie’s viral post—especially the people who tagged their significant other in the comments.

The fact remains that we do need more fat acceptance and body-positive messages in the world, and if that post inspired others to be more honest and authentic with themselves and others, then Tripp has done his job. But the act of being a good and decent person shouldn’t be motivated by an opportunity for tens of thousands of likes and other social media praise.

You don’t get brownie points for being a nice guy, and if you try to, you just end up looking like an exploitative jerk searching for validation instead.