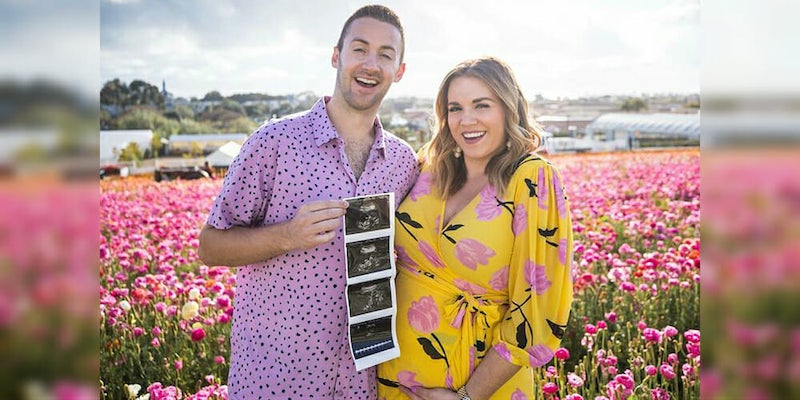 He says she has a ‘five-star womb,' among other things.

The internet’s favorite wife-lover, Robbie Tripp, better known as the Curvy Wife Guy, has announced that he and his wife are expecting a baby.

Folks may remember Tripp from his viral Instagram post in August of 2017, in which he wrote at length about how much he loves his wife’s body and curvy women in general. While some folks loved the message of positivity, others saw a lot of issues with his post, such as his focus on male sexual preferences over how his wife and other women feel about their own bodies, and saying that thin women aren’t “real” women. Some folks felt that he was using his wife to seek validation that he’s a good feminist, while simultaneously objectifying women through idolization.

Now, nearly two years later, Mr. and Mrs. Tripp have an exciting announcement: They are expecting a baby in October. They both posted announcements on Instagram on Easter Sunday, with lovely photos of them holding pictures of the ultrasound and a baby onesie in a field of flowers. However, the wording on the two posts is very different, in ways that echo the self-centeredness of Tripp’s post from two years ago.

While they both start their posts with the announcement, it immediately goes in vastly different tonal directions after that. Sarah Tripp wrote, “Our little October baby is growing fast and is already so incredibly loved.”

On the other hand, Robbie Tripp wrote, “It fills me with pure joy to announce that @sassyredlipstick is now a sacred vessel carrying my seed, the heir to the Tripp name, creating life in her beautiful, soft, increasingly round tummy.” In a later update to the post, perhaps inspired by people’s confused response to the phrase “a sacred vessel carrying my seed,” he added, “Sarah has been a pure fertile goddess these past 15 weeks and I’m just here to worship and support her as she grows the future leader of nations in her five-star womb.”

Ah yes, a mention of your wife as a “fertile goddess” and her “five-star womb” will clear up any notion that you think of women only as reproductive objects to carry your “seed.”

The odd brand of body positivity the Curvy Wife Guy brings to Instagram continues to induce eye rolls among many. But regardless, we at the Daily Dot wish the couple a happy and healthy pregnancy.