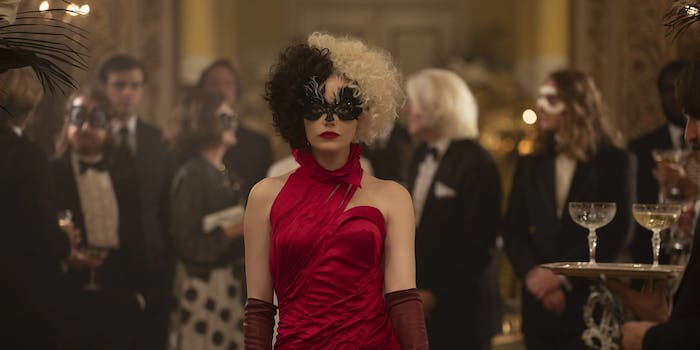 Costume designers are pushing back against studios using their work without credit.

As with all Disney movies, there’s a ton of merchandise for Cruella. And since it’s a film about the fashion industry, that merch includes a collaboration with a pricy fashion label. Rag & Bone’s Cruella collection includes outfits inspired by the film, following Cruella’s red, black, and white color scheme. It’s also earning serious criticism from Hollywood costume designers because Disney failed to consult (or pay) the film’s original designer for these remixes of her work.

Jenny Beavan is a well-known figure in the industry, winning an Oscar for Mad Max: Fury Road. She created numerous eye-catching costumes for Cruella, ranging from DIY punk aesthetics to elaborate ballgowns, and earning praise from critics. But Disney still went ahead with this Rag & Bone collaboration without consulting her. Speaking to Variety, Beavan said she was “horrified” to see her work being used without credit, but admitted that when you work on a studio movie like Cruella, “You basically do sign your life away.”

As Variety points out, some costume designers do earn money from official fashion tie-ins, like Mad Men‘s designer working on licensed outfits with Banana Republic. But this isn’t always the case, and many costume designers are understandably bitter about their work being used without compensation. Costumes like Elle’s yellow suit from Clueless can become iconic, achieving a long shelf-life without the original designer (in this case Mona May) seeing a dime.

Cruella is an obvious example to highlight this problem, with a Costume Designers Guild representative describing it as “a huge issue for our membership.” Cruella’s outlandish costumes are central to the film’s appeal, and it feels instinctively unfair for the designer to be snubbed while Disney rakes in the cash.

This is obviously a problem across the entire film industry, but with Disney, it overlaps with ongoing criticisms about the studio’s treatment of other creators. The #DisneyMustPay campaign launched last year, with authors accusing Disney of withholding royalty payments for classic Star Wars and Alien tie-in novels. Likewise, Disney makes massive profits from the Marvel franchise while the characters’ original creators don’t get paid. The Winter Soldier’s co-creator Ed Brubaker has been especially vocal about this issue. When he wrote the original Winter Soldier comics on a work-for-hire contract in 2004, he had no idea the character would become such a lucrative brand.

With Cruella, this controversy could cause problems during Oscar season. This film is a shoo-in for the costume category, with Disney earning nominations for several recent live-action films including Mulan, Beauty and the Beast, and Cinderella. But Disney will be hard-pressed to launch an Oscar campaign if Beavan is openly at odds with the studio.