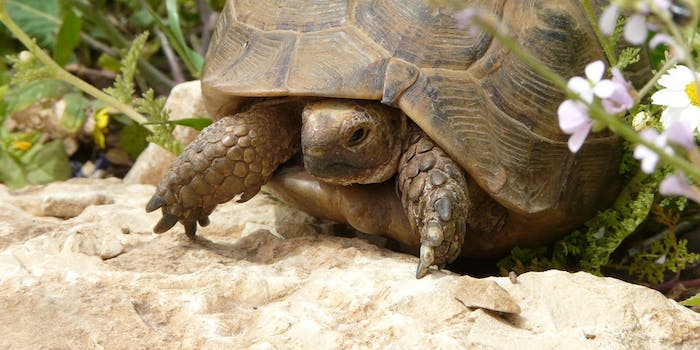 Care to chip in?

In the not so distant past, crowdfunding was hailed as the golden child of the new Internet age. Unfortunately, the utopian fantasies of a crowdfunded creative renaissance have taken a bit of a battering of late, with mainstream funding sites becoming bogged down by vanity projects and snake oil salesmen. The crowdfunding dream needs a new poster boy and it may have got just one. Meet Cedric and his giant penis.

Admittedly, Cedric is more of a poster tortoise than poster boy, but his penile woes have captured the hearts and minds of the Internet. Cedric, a spur-thighed tortoise suffers from a prolapse of the colaca, a condition that has caused his pride and joy to swell up into a permanent erection that drags behind him as he walks. Perpetual tortoise boners require immediate surgery, prompting Cedric’s cash-strapped owner, Miles Jelfs, to take to the Internet and appeal to the generosity of the Testudine-loving public.

Jelfs just wanted to do friend who wasn’t able to look after Cedric a favour by adopting the tortoise, but quickly found himself in over his head, reports the Birstol Post. Within hours of taking in his shell dwelling charge, it became painfully apparent to Jelfs that all was not well with Cedric’s turtlehood, prompting an immediate visit to the vet, who recommend swift action be taken to rectify the situation.

Unfortunately, Jelfs, a first time pet owner, had neither the pet insurance nor the cash required to fix Ceric’s engourged gentilia. In a plea for help, he turned to GoFundMe, a non incentive-based crowdfunding site, initially looking to raise $420 to cover a reinsertion procedure. But costs spiraled to $588 when it became clear that poor Cedric will require an amputation.

If all goes well, Cedric will have plenty of time to bask in his new found fame—spur-thighed tortoises can live for well over 100 years. Odds are, he’ll be munching lettuce and happily living penis-free long after the death of the crowdfunding industry that saved him.