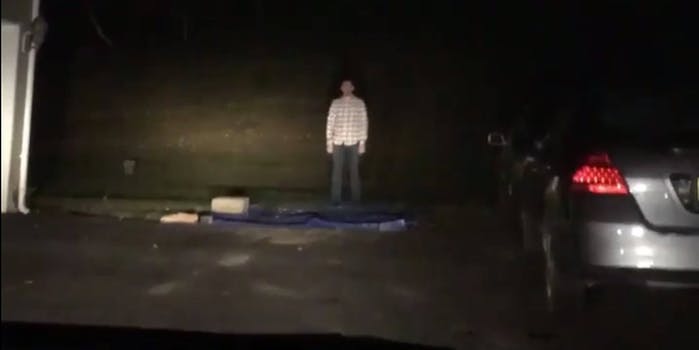 It's not what it seems.

There’s something actually unnerving about the first few seconds of this video that’s been retweeted over 5,000 times in the last 12 hours. A man in a plaid shirt stands alone outside someone’s house, his eyes as cold and vacant as the night itself.

But like a scene from a horror film, everything changes in an instant. I don’t want to spoil it.

ARE YOU FUCKING KIDDING ME RIGHT NOW THIS WAS LITERALLY AT MY FRIENDS HOUSE WTF HOLY SHIT @_KyleOLeary @brunojohn117 pic.twitter.com/wFu67i9GQL

If you’re having trouble playing it on mobile, here’s a YouTube mirror:

Chris Melberger, the comedian behind the video, said on Reddit that he wasn’t worried about getting arrested or show when dressing up like a creepy clown. “woman at walmart rolled her eyes and was like ‘oh another one,’ he wrote. “guess there have been multiple sales recently.”