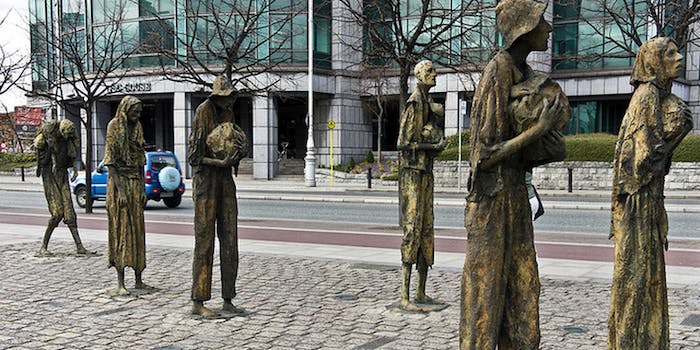 Telling your kids to eat their meals because there are starving children in other parts of the world is one of the oldest tricks in the parenting book.

Telling your kids to eat their meals because there are starving children in other parts of the world is one of the oldest tricks in the parenting book. But for one Arizona resident, that wasn’t enough.

On May 19, the unidentified progenitor of a set of ungrateful children posted an ad on Craigslist looking to hire a thin actor that could stand by the trash as the kids were forced to throw away their unfinished food.

“I’d love for you to get into the role,” the posting reads.

“Maybe a wide-eyed whimper and extension of an emancipated claw/hand as the meatloaf slides into the trash can. Must be able to pull off dejected as you sulk away.” 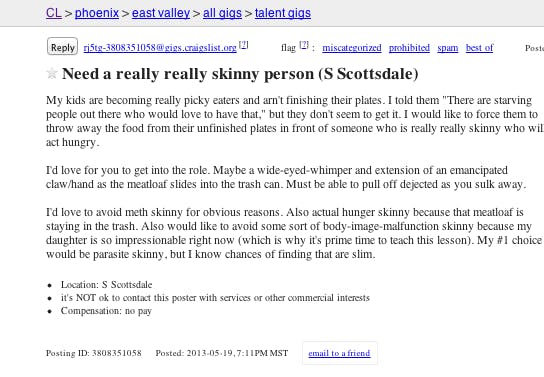 Not just any skinny person will do, however. Despite the fact that this is an unpaid gig, the author of the piece has standards. People who look like they do drugs—”methy skinny”— need not apply. Also not preferred are “body-image-malfunction skinny,” mostly because his or her daughter “is so impressionable right now.” If possible, you should be “parasite skinny.”

Is the ad legitimate? Could the person behind it really be this nuts? It’s hard to say. This is Arizona we’re talking about. This is the same state that counts Amy and Samy Bouzaglo among its residents.

We reached out to verify that it wasn’t some twisted joke, but our request for comment has yet to be returned.

Maybe we looked too hefty.