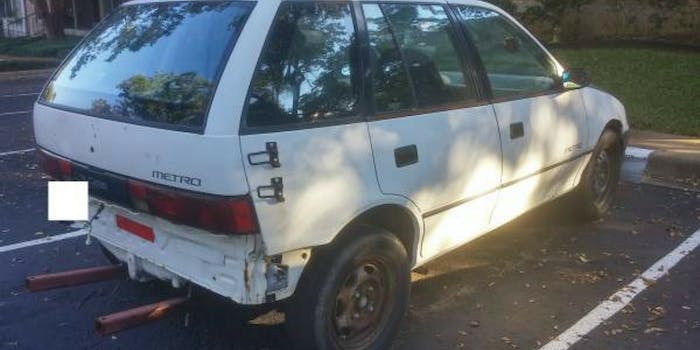 If you want to offload a 1993 Geo Metro in the year 2015, you’re going to need to be one hell of a good used car salesman. Consider this post a doctoral course in the art of selling a pre-owned vehicle on Craigslist.

The syllabus for such a course should consist of two lessons: 1) Be honest; 2) heap huge amounts of praise on a prospective buyer for being smart and studious enough to think that buying such a crappy car is a good business—and transportation—decision.

Make sure to read the Craigslist ad in its entirety because it’s goshdarn beautiful. Clearly, though, the seller will need plenty of help moving this car, because it sounds like a godawful piece of machinery.

Even with the poetry of a headline that reads, “The Undisputed Pinnacle of Automotive Engineering (93 Metro, 99k Mile) — $600,” and such phrasing as “it serves as a testament that we can live and work in harmony across different cultures and worlds, to produce new ideas and cars that are greater than the sum of their parts” and “Gaia will look upon you and smile when she sees you achieving an EPA estimated 53 MPG in the city and 58 MPG on the highway,” it’s clear that paying more than $200 for this car isn’t a great investment.

Still, we kept reading, because the text is almost too moving and because the writing is (probably way too) honest.

1) The car is beat to hell and has virtually no upgrades. Writes the owner:

“The lack of a muffler sends a very loud, clear message to other drivers: ‘I’m here. I’m a Geo. Get used to it.’ The 1993 Geo Metro is a car for the hardworking American that doesn’t want anything handed to them. No power steering, no antilock brakes, and no electric windows. This is a vehicle meant for those with the strength and will to tame it, without any assistance from technology designed for the lazy masses.”

“The lapsed registration and inspection serve as a figurative middle finger to the oppressive authorities who demand you have a muffler and working turn signals.”

3) If you die because of this car, your afterlife will be rewarding:

“Should you die in glorious car to car combat as a result of the tiny body and lack of airbags, you will ascend to Valhalla where you will feast and battle with other Geo owners for all eternity.”

As the poster writes, “The 1993 Geo Metro has chosen you. Are you brave enough to accept its calling?”

In other words, do you have $600 to waste on a car that probably should have been buried in a junkyard 20 years ago?