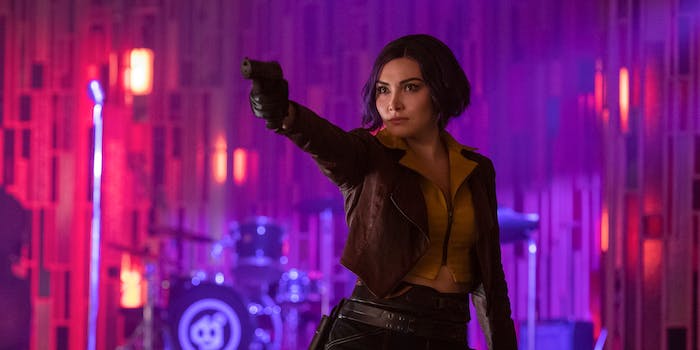 Earlier this week, Netflix debuted the first look of its highly anticipated live-action adaptation of Cowboy Bebop, and fans had plenty of thoughts about everything from John Cho rocking a pristine blue suit and his best anime hair as Spike Spiegel to the adorable corgi playing Ein the data dog. But the reaction to the show’s female lead has been more mixed, leading to some comments highlighting some sexist double standards—including from the actress playing her.

In the Cowboy Bebop anime, the outfit worn by the bounty hunter Faye Valentine is revealing: She dons a lowcut yellow top, matching yellow shorts, a flimsy set of suspenders, nude stockings, white ankle boots, and a loose red shirt. That was partially by design; in the anime, Faye used her body to distract others long enough for her to pull one over them.

In the first look photos, Daniella Pineda, who’s playing Faye on the show, has a yellow shirt and red coat that homage the anime character’s primary look, but that’s where the similarities end. On the show, Faye has knee-high boots, black stockings instead of nude-colored, black shorts, and her shirt isn’t designed to be as titillating on its own. As Cowboy Bebop writer Javier Grillo-Marxuach told io9 last year in regards to Faye’s costume, “we need to have a real human being wearing that.”

The changes to Faye’s costume were in part logistical, but for some Cowboy Bebop fans who wanted (or expected) Netflix to reproduce a replica of Faye’s costume from the anime, the outfit for the show was a disappointment. Soon after the photos came out, Pineda addressed detractors on her Instagram Stories, where she offered an “apology” for not looking or dressing exactly like the anime version of Faye Valentine.

“First, I wanted to apologize to the fans that I did not anatomically match the Faye Valentine character,” she said. “Six foot, double-D sized breasts, two-inch waist. You know, they looked everywhere for that woman and they couldn’t find her, it was kinda weird. So they just went with my short ass, I know, am I right?”

She joked about the possibility of putting herself in a time machine so she could get different parents to make her taller before apologizing for the other elephant in the room: the costume.

“You know, we tried, but doing stunts in tissue paper, things disappear, they rip, sometimes just got lost—” she continues before the edit jumps to another clip. “Anyway, like I was saying, that original costume, they made a couple of them, but like I said, they got sort of slurped up in my various crevices, never to be retrieved again, so we needed to build something that could withstand the test of time.”

A few days later, Pineda’s off-the-cuff response to people’s outrage over the costume went viral after TheQuartering, a YouTuber with more than a million subscribers, posted the video and framed it as an attack on Cowboy Bebop fans.

“Holy shit, the actress from cowboy bebop is already shitting on the fans,” he tweeted. “I am sure this will turn out amazingly.”

TheQuartering’s tweet went viral. Some point pointed out that people have been cosplaying as Faye Valentine with no problem for years while seemingly ignoring Pineda’s point about doing stunts in costume. But many more of the quote-retweets of the video were used to dunk on the sexist and impossible double-standard set for a woman playing a character from an anime.

Some people even pointed out that Pineda’s initial video is essentially how Faye herself would’ve reacted to the comments.

Since posting the original response on Instagram, some people have taken to privately messaging Pineda with more complaints. But those videos also had the opposite effect: Instead of making more people angry, they’re that much more interested in Cowboy Bebop because of Pineda.