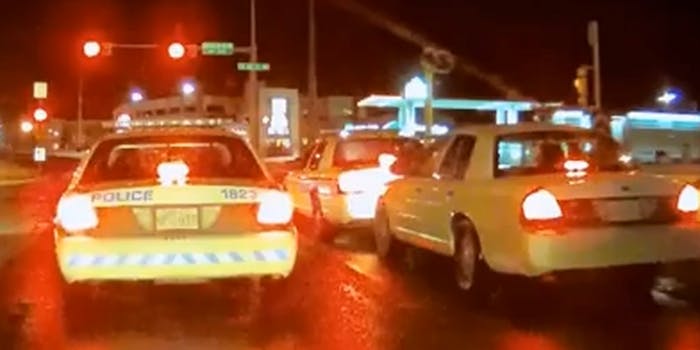 Remember the old adage about the how the fastest you'll ever see a policeman run is when he's chasing a doughnut down a hill?

Three policemen in Canada are being investigated for a YouTube video that allegedly shows their squad cars racing Fast & Furious-style into the parking lot of a Calgary Tim Hortons.

Basically, they’re under investigation for being overly zealous about the opportunity for a good donut.

The three policemen have not been named, but police chief Rick Hanson told the Canadian Broadcast Corporation Tuesday afternoon that his department is investigating the situation.

“I’ve had one look at it,” he said. “I’ve noticed the speeds for two of the police vehicles were—I don’t think they made it to 50 kilometers per hour [roughly 30 miles per hour], but there’s one vehicle there where we’re looking at what he was doing and what his intentions were at that point in time, so until that review is done, we’ll wait to see what comes with that.”

If it’s not clear from watching the video, Hanson is in all likelihood referring to the squad car in the left lane at the beginning of the clip—the one that jets out when the light turns green and then cuts into the right lane before making a hard right into the Tim Hortons parking lot.

“We talk about traffic safety all the time and when somebody firms what may appear to be an impropriety, we are obligated to have a look at it,” Hanson said.

Remember the old adage about the how the fastest you’ll ever see a policeman run is when he’s chasing a doughnut down a hill? Here’s doubting anybody on the force ever got in any trouble for that!