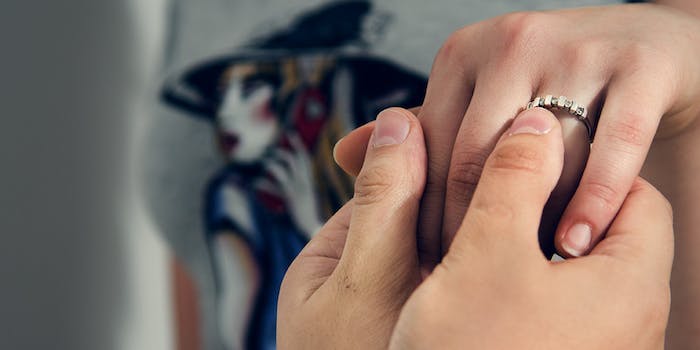 Put your ring finger up where I can see it.

Despite the multitude of horrors and tragedies that police dashcams have captured recently, not every traffic stop ends poorly. From the cop who gifted a high schooler with tickets to her favorite band’s concert to the police department of  Lowell, Mich., handing out presents instead of tickets, those who are sworn to protect and serve seem to find new ways to surprise unsuspecting citizens.

But perhaps no one was more taken aback after being pulled over for a broken tail light than Sara Wolff. The girlfriend of Galveston Police Officer Gregory Parris thought she would be let off with a warning or at most a ticket, but thanks to some help from his friends at the stations, Officer Parris had a lot more in store.

Houston’s KOHU.com reports that “With a straight face, the officer told her she had outstanding warrants. He asked her to get out of the car. A lieutenant shows up to sort through it all and calls Ofc. Parris to make his move.”

Being the romantic he is, Office Parrish declined to have his fianceé waiting for him in handcuffs when he arrived on the scene, though another office offered.

Parris’ proposal was met with a resounding yes, and it’s a good thing it was, too. “She might have gone to jail otherwise,” Parris told the news station, jokingly. The future Mrs. Gregory Parris, overjoyed in the moment, went on to say, “I can’t imagine being proposed to any better than that. It was perfect for us.”

While we can list a whole slew of nerdy, Notebook-inspired, and heartfelt proposals that might have been a little less scary, we’re glad the couple is happy. It just goes to show you there really is someone out there for everyone!