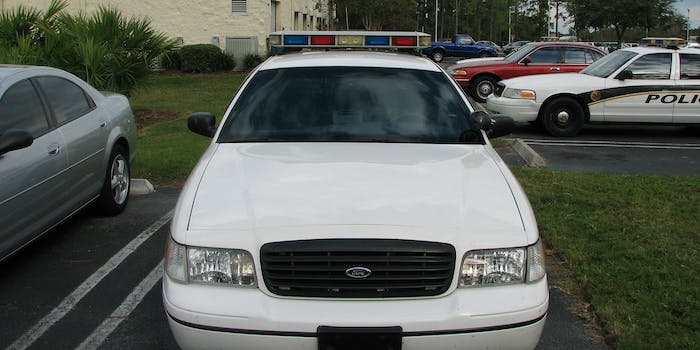 A Gulf Breeze, Fla. police officer was seriously injured on Monday while attempting to make a DUI stop. The driver he pulled over panicked, and caused chaos by speeding off during the traffic stop.

The officer, Sgt. Kerstan Tatro, stopped Amy Lee Giorgio, 30, just near the south end of the Pensacola Bay Bridge after observing her driving erratically. While standing outside of her car and questioning her, Tatro noticed Giorgio trying to shift her car into gear.

When he reached into the car in an attempt to stop her, Giorgio accelerated, running over the officer’s foot and dragging him for several feet before he was thrown to the side and she sped off.

Early reports clarify that Tatro suffered a broken arm in the incident but his injuries are not life threatening.

A driver who was at the scene and saw the incident followed Giorgio’s Lexus CV to the parking lot of the Crowne Plaza Pensacola Grande Hotel where the Pensacola police later arrived and took her into custody.

Gulf Breeze Chief of Police Robert Randle said responding officers found drugs in Giorgio’s possession and that she appeared to be impaired during her arrest. Giorgio had been scheduled for a Jan. 20 trial on charges of possession of cocaine, possession of drug equipment, and driving under the influence was transported to Santa Rosa County Jail. According to Randle, she had previously been arrested numerous times for drug offenses and has active warrants in Escambia and Santa Rosa counties.