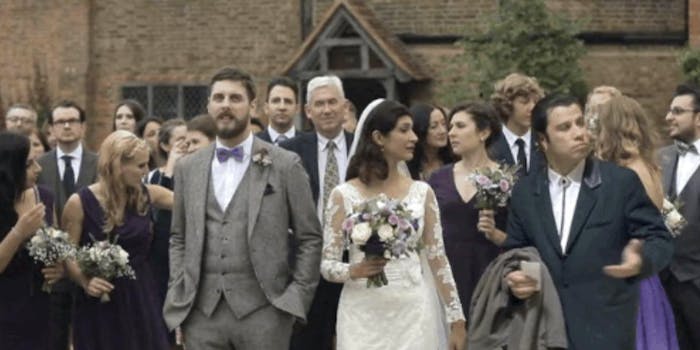 He fits in so perfectly.

Eighteen years later, in 2012, a Reddit user took the scene of a confused Travolta wandering around a house…

…and used to explain what it felt like when his daughter asked for “a doll” for Christmas.

MRW I ask my daughter what she wants for Christmas and she says, “A doll.”.

After that, it was off to the races, as people delighted in placing “Confused Travolta” in various appropriately confusing situations.

For example, here he is playing hide-and-seek with his nephew.

MRW I’m playing hide and seek with my little nephew

Here he is trying to pick out some marijuana from a dispensary.

MRW I entered a marijuana dispensary for the first time…

But John has never seemed more at home than when he’s trying to figure out where to stand for a wedding photo. It’s a situation where everyone is confused, and he’s certainly dressed for the part.

The original footage comes from Michael and Annem Hobson’s 2014 wedding. Michael—who said his new wife asked him to work on the footage—spliced in Travolta perfectly.

This probably wasn’t what his wife had in mind, but look at it this way, Mrs. Hobson: You’re not losing your wedding footage. You’re gaining a scientologist wedding guest.