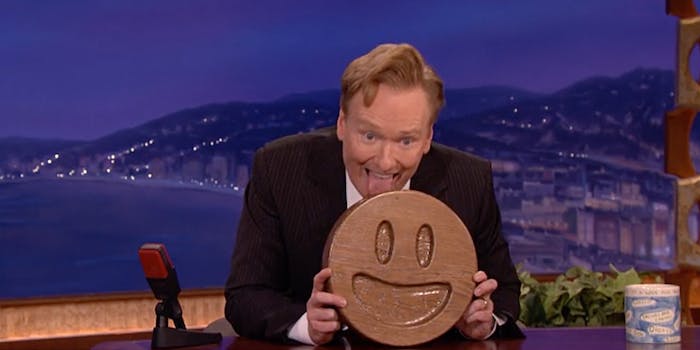 So this is a thing now, apparently.

A lighthearted skit on Conan has transformed into an wildly popular charity fundraiser, with more than 1,300 people paying through the nose to get their hands on a limited-edition “handcrafted wood emoji”—raising upwards of $100,000 for the Children’s Defense Fund.

A mock commercial featuring Parks and Recreation star Nick Offerman aired in Nov. 2014, promoting a fictional range of painstakingly crafted, handmade solid oak emoji. The spoof was such a hit that Conan teamed up with Tilt.com to offer a limited run of 100 of the emoji, retailing for $100 a pop—and they sold out within minutes.

They then offered another, expanded run of 500—and they sold out in minutes again.

Conan O’Brien has now launched a third and final offer—selling as many as people will buy in the next 9 days, again for $100 each. As of press time, that number stands at a staggering 1,321—raising more than $100,000 for charity.

The Children’s Defense Fund is a non-profit advocacy group that “has worked relentlessly for more than 40 years to ensure a level playing field for all children.” The organization works on issues ranging from poverty to child abuse and child care, with more than a dozen offices across the U.S.

Emoji offered include Smiley Face, Heart Eyes (“I Love You”), The Wink, The Cat, and Pile of Poo—which has been by far the best seller.

You can grab your own wooden emoji by heading over to Tilt.com, and you can watch the original spoof commercial here: