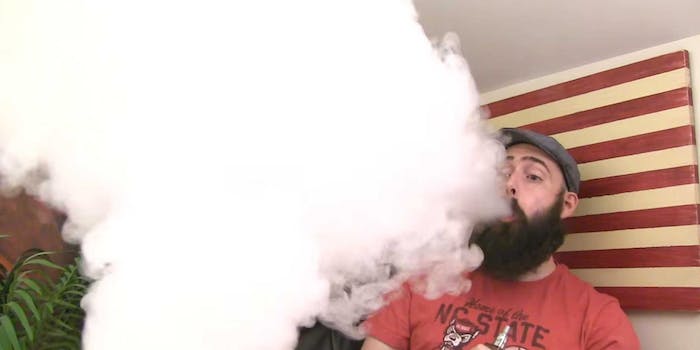 Of course vaping is now a professional sport

Do you even blow, bro?

Welp, I can now count vape cloud competitions and “cloud chasing” as two things I didn’t know existed until just now. Thanks to the Internet and my morbid curiosity, I cannot ever unlearn that some people who vape (mostly dudes) also like to compete to see who blows the largest cloud of vapor.

I suppose any substantial prowess in this sport indicates that a) you purchase only the highest-quality vape materials (something to do with batteries, coils, and oils—oh my!) and b) your lungs are decently sized.

Since vaping has become a recreational activity, cloud competitions have only grown in number. Vape clouds are judged on, according to the following video, “girth, length, and overall size density” (there’s absolutely no way that vape clouds are a proxy penis). Chris “Bud” Wilson, the winner of the competition featured in the same video, is modest about his monster clouds: “That sounds weird: professional vaper. You know what I mean? It’s just like, I just blow clouds, ya know?”

The reason these competitive vapers can produce such girthy(?) clouds is that most “cloud chasers” modify their vaporizers so they can burn things like vegetable glycerol and liquid nicotine. Vape companies will often pay and sponsor vapers who have proven themselves blowers of impressive clouds. Before you decide to compete for the most well-endowed cloud, you’d be wise to heed the advice of users who know they’re doing.

As for me, I’m in luck. After a quick search for a cloud competition nearby, I discovered Vape Blast 2015, a vaping conference that takes place in August just a mere hour away. Stay tuned for my in-depth coverage of this event some time in September. Until then, vape it to the limit.