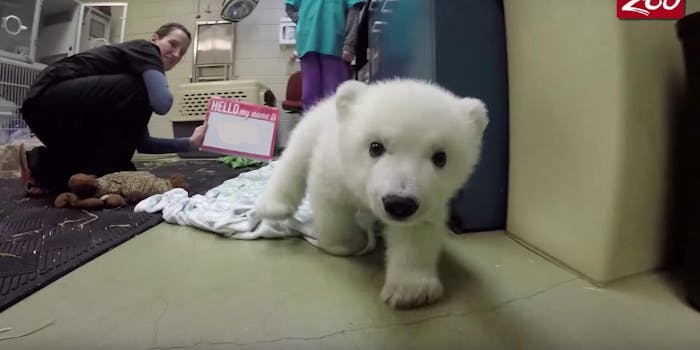 Columbus Zoo’s baby polar bear gets a name, remains too precious for this world

If there exists an animal cuter than this bear, we haven't seen it.

Forget turning up the thermostat in the winter—you’ll want to cuddle up with a baby polar bear that looks like a living Beanie Baby.

Earlier this year, the Columbus Zoo asked for some help naming its polar bear cub. The choices included Desna, Kaya, Nora, and Sakari. People in 115 countries cast 88,061 votes, and the results are in. Meet Nora.

Zoo guests aren’t yet able to see Nora, as she’s being kept behind the scenes at the Animal Hospital. It’s possible that she’ll make her public debut in March, but zoo staff are waiting until they know that she’s completely ready to face all her fans IRL.

Until then, you can keep up with Nora on the Columbus Zoo’s YouTube channel.