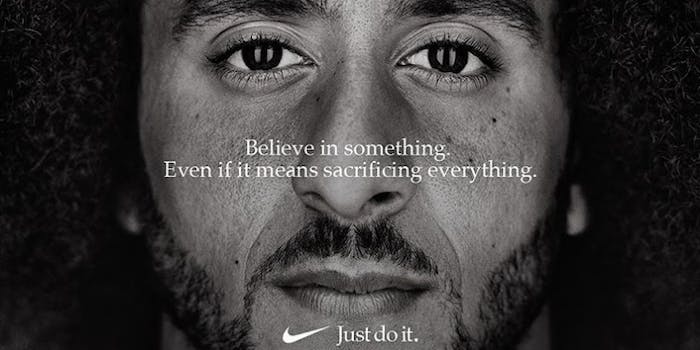 We live in the era of meme culture, so each new topic that hits the 24-hour news cycle becomes immortalized as one.

Nike launched into the political fray this week by announcing that Colin Kaepernick will be among those featured in its 30th anniversary “Just Do It” ads. Kaepernick, who used to play for the San Francisco 49ers, hasn’t played football since 2016 when his protest of racial inequality sparked a nationwide conversation. The controversy, spurred in part by President Donald Trump’s attacks on the NFL, has resurfaced multiple times since 2016, elevating partisan ire each time.

It wasn’t long before the announcement of the ad sparked outrage among those who agreed with the president’s stance that Kaepernick’s knee protests during the national anthem are disrespectful toward the armed services. #BoycottNike quickly spread through Twitter, and people began burning their purchased Nike gear in protest of the move. Soon after, the memes were born.

That’s because the Kaepernick ad itself is easy to alter: It’s just a black and white photo with some inspirational text on top. (The original tagline is “Believe in something. Even if it means sacrificing everything.”) Slap a photo of disgraced elected official Anthony Weiner or Doctor Strange, and the jokes write themselves:

Last one for now and it's a strange one…. #justdoit pic.twitter.com/oZifwSJ2Wy

I want to congratulate Anthony Weiner on his new Nike deal… #JustDoIt pic.twitter.com/3rHJBZAQ5p

Nike has taken a hit for the political gamble, seeing shares fall in the direct aftermath of the announcement. Many people who support Kaepernick and the move by Nike have promised to throw their support behind the company, however, and the company is unlikely to see very much long-term financial damage done.