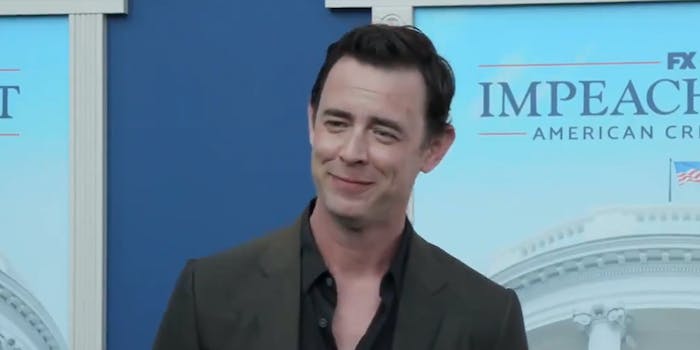 The reporter was asking Colin Hanks about his brother.

Earlier this month, Chet Hanks spread misinformation about COVID-19 and revealed that he lied about his vaccination status on social media, a move that received immediate pushback—especially after his parents, Tom Hanks and Rita Wilson, both got COVID last March—and, inevitably, his family is being asked about it.

Hanks’ brother, actor Colin Hanks, was in attendance for the world premiere of American Crime Story: Impeachment Wednesday night, where he plays Mike Emmick. Speaking to Variety, Colin Hanks was asked about the importance of telling Monica Lewinsky’s story now and what he might’ve asked Lewinsky (who was also a producer on Impeachment) about that time. But Variety’s Marc Malkin also asked Colin Hanks about Chet Hanks’ anti-vax comments.

“But your brother recently talked about not wanting vaccines and how this is just like the flu,” Malkin said. “How are you feeling about that?”

“That’s one person’s opinion,” Colin Hanks said as he shrugged.

The clip quickly went viral as some people related to the awkward position that Colin Hanks was in of being asked about something absolutely idiotic that his brother said.

“With the Brothers Hanks, you get the sense “That’s one person’s opinion” has come up a time or three,” Sarah Layden wrote.

Others locked onto Malkin himself, whose voice reminded them of a Muppet—particularly Grover.

But for now, Malkin is taking it in good stride, replying to several people who asked if Grover was conducting the interview that yes, it actually was Grover. Either way, he’s not shying away from the big questions.