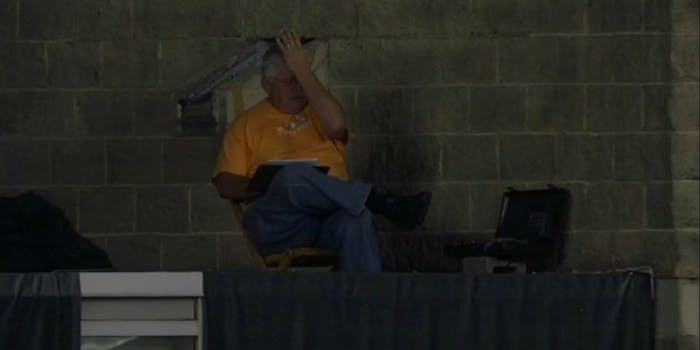 The Cleveland Indians are 71-72 on the season, and only 10,516 fans showed up to watch the ballclub that’s going nowhere battle the Kansas City Royals on Tuesday night. So forgive the guy whose job it is to set off the stadium fireworks when a Cleveland batter hits a home run if he got a little overzealous when he saw a ball disappearing over the outfield fence.

I mean, the man did successfully set off those fireworks. The only problem was that the Indians weren’t the ones to hit the home run.

So yeah, that’s pretty much the opposite of what this dude’s job is. And his shame is apparent. As the fans boo and the Royals celebrate, he hides his face in his hands and his hat. But he can’t disappear, no matter how he tries.

As Alex Rios, the home run hitter, said, “It actually got me nervous. I heard all the people screaming.”

Luckily, the Indians had a solid rebuke for anybody who exploded in anger at the fireworks guy

Re: The fireworks guy …

Pardon me Mr. Perfect! I guess I forgot you never make a mistake!https://t.co/OCcm6Z6kQP pic.twitter.com/GUYiXDjfHQ