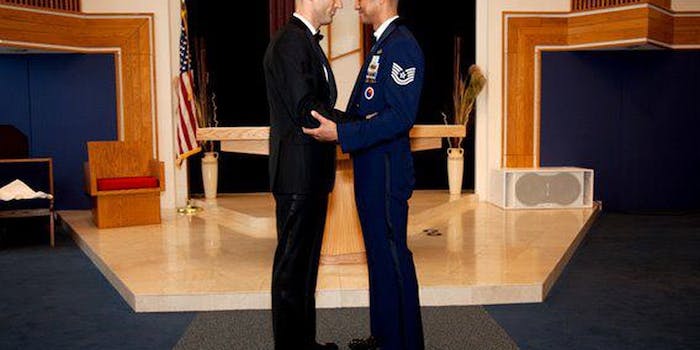 A photo of the ceremony for Tech. Sgt. Erwynn Umali and his partner Will Behrens has been liked over 160,000 times, and 17,000 people have shared the couple's story.

On immediate viewing, you might not realize the photo’s significance: two men, one in an Air Force uniform, standing close and looking in each other’s eyes in a sparse chapel. But it’s an historic event. Will Behrens (left), 34, and Tech. Sgt. Erwynn Umali, 35, became the first same-sex couple to have a civil union ceremony on a military base.

A staggering 160,000 people have liked the photo since it was posted on Facebook in mid-July, and more than 17,000 have shared it. It was taken at the Joint Base McGuire-Dix-Lakehurst chapel in Wrightstown, NJ.

Getting there was an arduous process. Both men had been married with children before admitting to themselves they were gay.

They met in 2006, interestingly, at a Baptist church in New Jersey that preaches against homosexuality. Behrens was the choir director, and Umali a new member. The two kept in touch as Umali was deployed to Afghanistan in 2008.

The two began to acknowledge their feelings for each other on an all-male church trip, though they only began a romantic relationship in 2009. Umali stopped attending that church, but Behrens remained a member until the church tried to “cure” him. For the sake of Umali’s career, the two waited until the summer 2011—when the repeal of the U.S. military’s “Don’t Ask Don’t Tell” policy was about to take effect—before they got engaged.

Neither man’s parents were present for the wedding, so they were each given away by their children from previous marriages.

Behrens, in his vow, acknowledged the enormous obstacles the couple had overcome to be there.

“I never met anyone that it was worth giving it all up for, until I met you,” he said.