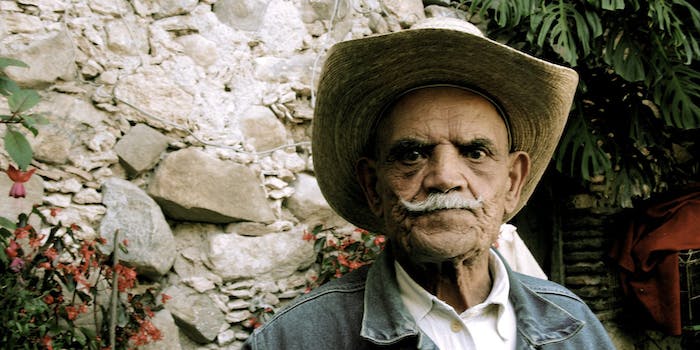 The historical significance gets lost in the stereotypes.

Set your alarm for 7 am. We will be giving free Biscuit Tacos away tomorrow until 11 am. https://t.co/TkTyAH0tSO pic.twitter.com/DwwreomjJm

The branding on the website suggests Revolution with a capital “R,” beckoning you to “defect” from traditional breakfast—bland, boring, American breakfasts. Or maybe, just maybe, they expect you to embody the spirit of Mexican independence, to feel like a radical fighting for a cause, breaking free from the colonial hegemony of the Spanish. After all, isn’t that what everyone thinks Cinco de Mayo is all about? In a word: No.

On May 5, 1862, a small Mexican army in the state of Puebla, just southeast of Mexico City, staved off 8,000 opportunistic French troops looking to establish a new French colony. The victory merely held off the French from entering Mexico City for a year, however. The victory is believed to have been regarded favorably by the United States who, during the Civil War, feared having France in such close proximity to the Confederacy. The actual Mexican War of Independence started on September 16, 1810. It is celebrated just as Americans celebrate July 4.

Irrespective of what Cinco de Mayo may or may not be about, it doesn’t really require much for white people across the country to brandish their fake mustaches, sombreros, and serapes, to swing frozen margaritas in their arms as they sing “La Bamba,” or do the Pee-Wee Herman dance to “Tequila.” I’m all for observing history and cultural identity, but Cinco de Mayo is yet another opportunity for white Americans to reduce the experience of a marginalized, colonized culture into a day about eating and drinking themselves into a vomitous stupor for all the wrong reasons.

It wouldn’t be fair to say that Cinco de Mayo celebrations are pointless in America. After all, many Latinos in the United States during the Civil War saw the original battle in Puebla as a win against the Confederacy. As Carlos Harrison writes for the Huffington Post, “The French supported the Confederates during the Civil War. The Mexican-American residents of California, Oregon, and Nevada backed the Union. So did Mexico’s president, Benito Juarez.” The battle itself was still a source of pride for Mexicans in Pueblo for the next one hundred years, the holiday just wasn’t as big of a deal in Mexico as in the U.S.

That’s as good a reason as any to party, but the historical significance gets lost in the commodification and stereotypes.

Just last year, MSNBC aired a startlingly offensive segment wherein the producer of Way Too Early rolled into frame wearing a sombrero, shaking a maraca, and chugging tequila. Gawker reported that the host, Thomas Roberts, explained that the holiday was “an excuse to drink tequila on a Monday morning at work for Louis [Burgdorf, the producer].” The backlash was, understandably, swift.

“This is simply the worst example I have seen of a discriminatory stereotypical portrayal of any community by any media,” wrote Hugo Balta, president of the National Association of Hispanic Journalists. “The fact that this was done by a news organization is abominable. This wasn’t a chance occurrence. This was a planned segment where many journalists agreed on the content and execution which concluded on what was seen nationwide.” Both Roberts and Burgdorf issued an apology.

This also happened that same morning:

“Cinco de Drinko” is commonplace in white vernacular when referring to the May 5 holiday. Last year, a UC Davis party with that name was canceled amid protests from Latino students calling the party “racially insensitive.” The students caught wind of the party through Facebook on an event page that included pictures of “four male students wearing sombreros while trying to hop a chain-link fence as two female students stand nearby smiling and wearing Border Patrol uniforms,” the Associated Press reported.

Along with the ubiquitous use of stereotype in Cinco de Mayo, the holiday only celebrates Mexican culture as a consumable culture: Mexico is a drink, a taco, the lime in the Corona.

Taco Bell’s promotion embodies that spirit of Cinco de Mayo, as it reduces the day to, at best, its digestive element. The awareness of Mexican culture simply serves as a guise for people to get drunk on a Tuesday night, blaming that weekday hangover on Santa Ana.

The cultural theorist, Bell Hooks, writes in “Eating the Other,” “Within commodity culture, ethnicity becomes spice, seasoning that can liven up the dull dish that is mainstream white culture.” Cinco de Mayo provides white Americans that cultural spice to be Mexican for a night and everything that means to them: tacos, cervezas, brownface, and “La Cucaracha.” For tomorrow, they are yet again on top, albeit hunched over a toilet.

On the surface, Cinco de Mayo is an outstanding holiday that celebrates the triumph of a small army over an imperialist force, a source of pride for the people of Pueblo as well as Mexicans north of the border (especially after the brutal American landgrab in 1848). But nobody is living it up in the club or at the frat houses honoring Pueblo or raising a glass for the Union and against the French. Taco Bell is definitely not handing out nasty tacos in favor of Mexican agency.

Cinco de Mayo is simply a way for Americans to continue to render Mexicans invisible while honoring what they can consume: food, booze, and stereotypes.

Photo by sari_dennise/Flickr (CC BY 2.0)