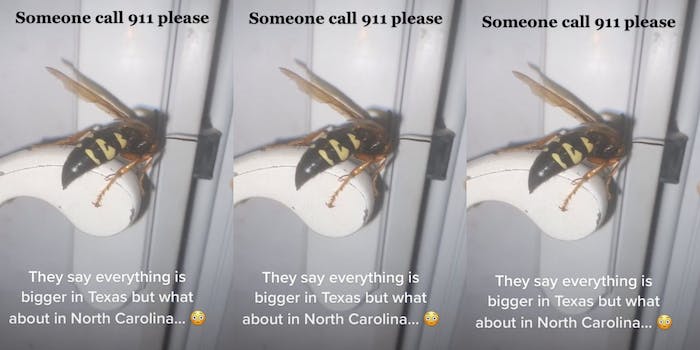 ‘Why’s it throwing it back’: TikTok viewers say giant wasp is twerking on doorknob

Viewers can't get enough of this horrifying giant wasp.

A massive cicada killer wasp has one viral TikToker and her viewers freaking out.

Courtney Leanne, known as @hazylittlething_ on TikTok, posted video footage of the bug, captioning the TikTok, “someone call 911 please.” The video has 14.2 million views and 62,900 comments since being posted last week.

The general consensus in the comments is that the bug is a cicada killer wasp, a large and colorful wasp that’s often confused with murder hornets, according to National Geographic. Although prolific predators of cicadas, they pose no danger to humans.

The wasp in Leanne’s TikTok can be seen laying on the doorknob of what appears to be her front door.

Some viewers urged her to back up and get away from the bug.

“WHY ARE YOU SO CLOSE TO IT GIRL BACK UP,” one person said.

Someone else wrote, “It’s called i’ll be dammed,” to which Leanne replied, “With and extra side of HELL NAW.”

The on-screen caption read, “They say everything is bigger in Texas but what about North Carolina?”

In addition to being huge, the wasp gained attention among viewers for appearing to throb or pulsate on the door handle.

“Why is it throbbing,” one viewer asked in the comments. Another said, “Why’s it throwing it back.”

Several commenters suggested that the wasp was twerking.

“Ay yo he be twerking,” one person said.

Whether or not they know how to twerk, cicada killers are known as the “gentle giants of the wasp world,” entomologist Justin Schmidt at the University of Arizona told National Geographic. Male cicada killers don’t sting, and females avoid people and rarely deploy stingers.

In order to ever be in danger of them, you’d have to try to physically handle them.