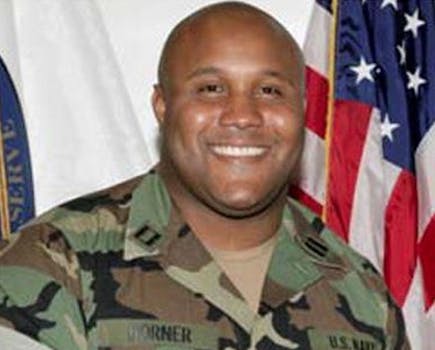 Dorner, on the run and accused of multiple killings, is picking up a fan following on Facebook.

The fugitive in question is Christopher Jordan Dorner, a former Los Angeles Police Department officer who’s accused of ambushing two Riverside, Calif. police officers. He is also the primary suspect in the killing of an Irvine, Calif. couple. One of the victims in the latter incident is the daughter of a police captain who represented Dorner in his dismissal hearing.

Dorner also published a rambling manifesto in which he claims to be persecuted by the powers that be. He also laments the fact that he’ll miss out on watching the Discovery Channel’s annual “Shark Week.”

The manifesto has resonated with like-minded folks. It’s not just Anonymous championing Dorner. It’s regular Americans who are tired of being held down by the man, and they’re letting their frustrations show in multiple Facebook pages.

As of right now, “Christopher Jordan Dorner” is the most popular of the lot, with 1,737 likes.

The page’s description, which is written in all caps, explains why they’re supporting the fugitive.

“A man with morals and a hero. A real rebel with a cause! This man is standing up for a cause he will be remembered. Hes trying to stop corruption. Have respect for a man who is willing to die for something instead of living for nothing.”

Rambo quote aside, the page fails to mention why Dorner is on the run in the first place.

Equally popular is “I Support Christopher Jordan Dorner,” which has amassed 1,618 likes. Unlike its Facebook sibling, this page at least acknowledges the crimes Dorner is being charged with.

“This is not a page about supporting the killing of innocent people,” the page reads. “It’s supporting fighting back against corrupt cops and bringing to light what they do.”

Earlier today, the page’s administrators posted a link to a “We The People” petition demanding that the White House “look into the corruption in the LAPD that Christopher Jordan Dorner has spoken of.” The petition has gathered 2,850 signatures toward the 100,000-signature threshold required for the White House to respond.

Another exalting page calls for Dorner to be elected President of the United States.

“[This] man has done what the founding fathers did, in declaring war on the corrupt ruling class,” reads one of the early posts. “[We] propose electing a man who could no longer sit idly by and watch as malicious tyrants abuse the innocent.”

Dorner joins Aurora, Co. shooter James Holmes as infamous gunmen who have had Facebook pages created in support of or in tribute to them.

CORRECTION: An earlier version of this article overstated the popularity of the We The People petition to look into Dorner’s allegations of police corruption. It has gathered nearly 2,900 signatures as of February 14, still nowhere close to the 100,000-signature threshold required for a response from the White House.