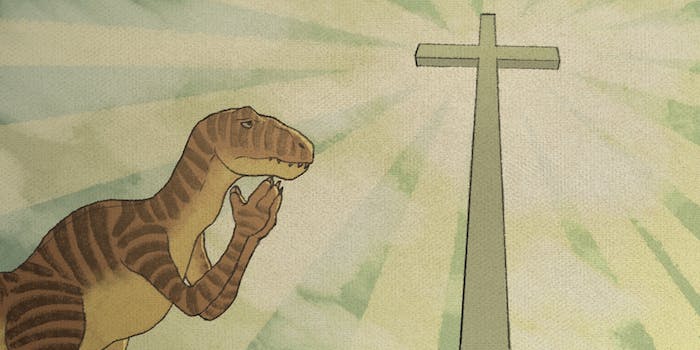 Inside the fundamentalist troll hole of Christians Against Dinosaurs

Either Christians Against Dinosaurs is brilliant satire, or it's the next frontier of the fringe religious right.

A grassroots religious movement called Christians Against Dinosaurs contends that dinosaurs are a hoax perpetrated on the public by the paleontology community in exchange for “millions of dollars, a pat on the back by the liberally biased media, and a big high-five from all the feminists who want to kill babies and scream at their bodies.”

The organization’s website does not lay out a specific agenda or set of beliefs beyond stating that dinosaurs do not exist. It’s easy to wonder if it might be a parody of religious fundamentalism, though its earnestness suggests otherwise. As Poe’s law states, “without a clear indicator of an author’s intended sarcasm, it becomes impossible to tell the difference between an expression of sincere extremism and a parody of extremism.”

We got in touch with the group to learn more.

A young woman named Kristen Auclair features prominently in the group’s videos, but does not claim any sort of leadership or spokesperson role. “There’s no actual leader,” she told the Daily Dot over the phone. “Our only tenet is to spread information about the anti-dinosaur theory and really educate people.”

The previously mentioned lack of cohesive mission statement is due to the group’s consisting of “lots of different denominations,” said Auclair. “There are some with much deeper scientific backgrounds than mine.” Ms. Auclair declined to name where she works today, having recently left a job in the insurance industry after “dozens and dozens of atheists and horrible, violent people” sent “profanities and vulgarities” to her former employer.

Jeff Wilson is a professor at University of Michigan’s Department of Earth and Environmental Studies and a curator of its Museum of Paleontology. He does not have a favorite dinosaur. “I’m not crazy for dinosaurs in that way,” he said, “and I didn’t grow up interested in them. I’m fascinated by complexity, particularly anatomical complexity—and dinosaurs have that.”

Wilson takes umbrage with this group’s claims. “Scientists have worked out the notion that dinosaurs are real examples of past life,” he told the Daily Dot. “There’s no idea of a dinosaur that someone constructed and then filled in the gaps. Fossils don’t lie, and we can’t make them do things they don’t do. They only go together a certain set of ways.” 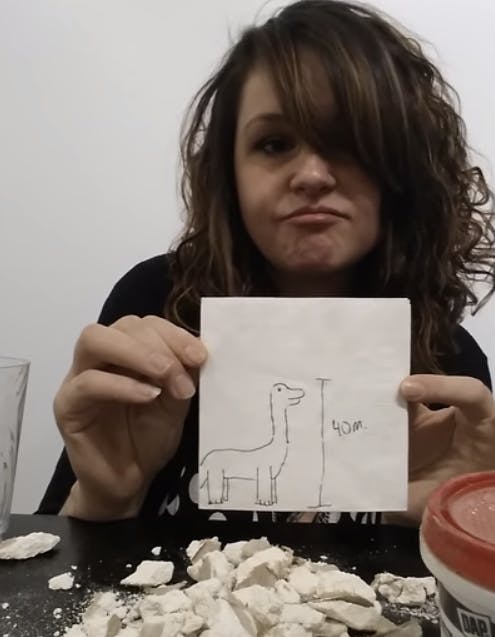 Kristen Auclair of Christians Against Dinosaurs denies that the prehistoric creatures ever existed.

The word “dinosaur” was coined in 1842 by biologist Richard Owen, but Wilson explained to us that fossils have been found since the 17th century. “The organic nature of fossils is an issue that was resolved in the late 1600s by Steno. And while there is some ambiguity in certain fragmentary fossils, there are literally thousands and thousands of cases where we have the complete, articulated organism preserved in the rock, and there is little wiggle room in how we might reconstruct them,” he wrote to us in an email. “Examples of these span the tree of life and include dinosaur fossils.”

Auclair suggests that fossils are carved by hand and that dinosaur skeletons, such as this gigantic one discovered last year, are manufactured artifacts: “With the advent of 3D printers, it’s increasingly easy to produce these on a massive scale. They could be a lot of different things. Artists have been carving sculptures out of marble and hard stone for centuries.”

“Dinosaurs explain everything you ever wanted to know about religion. Why do bad things happen to good people? Because God’s too busy thinking about how sweet that Ankylosaurus was. Its tail was a baseball bat that it would use to hit a T-rex in his face!” —Neal Stastny

It is often in conservative Christianity’s interest to vie for a “young earth” and posit that our planet is aged between 6,000 and 10,000 years. This stands in stark contrast to the scientific position that the earth is some 4.5 billion years old.

“If Christians Against Dinosaurs is satire, then it’s brilliant.”

Jason Stellman and Christian Kingery are former pastors from a conservative tradition called Calvary Chapel who now host an entertaining podcast called Drunk Ex-Pastors. Their lives are drastically different today, with Kingery now professing agnosticism and Stellman having converted to Catholicism, but the fundamental religious world is one they still know well. (Kingery’s favorite dinosaur is “T-Rex, because of all of the jokes you can make about how short their arms are.” Stellman’s is “whatever Dino from The Flintstones was.”)

The pair explained the particulars of young earth creationism to us over the phone. “This is based on a woodenly literal reading of the genealogies in Genesis,” said Stellman. “But it’s easy to show that genealogies in Scripture have gaps. They are theological in nature, not meant to be taken literally. They play fast and loose with history, and young earth creationism presupposes that the Bible is a history book. It makes Christians look like they’re nuts.” 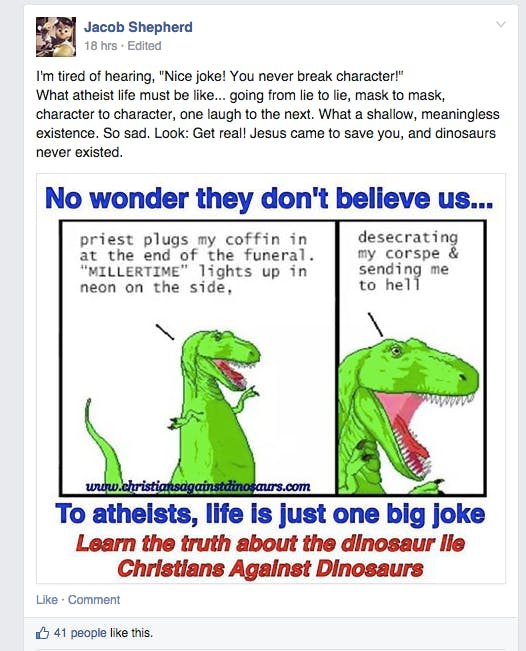 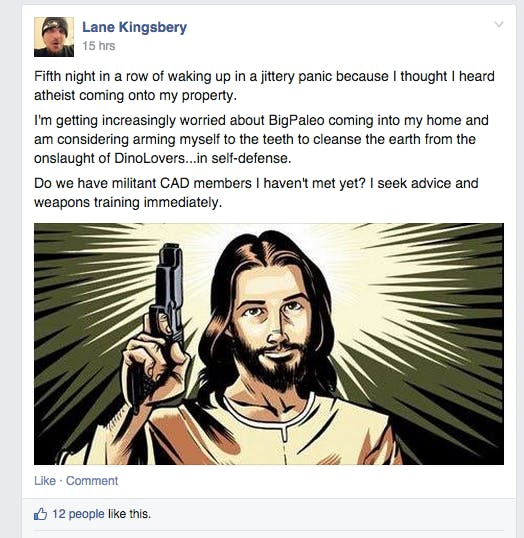 “If Christians Against Dinosaurs is satire, then it’s brilliant,” said Kingery. “With most sites you can click around and tell right away,” Kingery said, “but the fact that you can’t here shows to what extent fundamentalism has said some ridiculous things.” 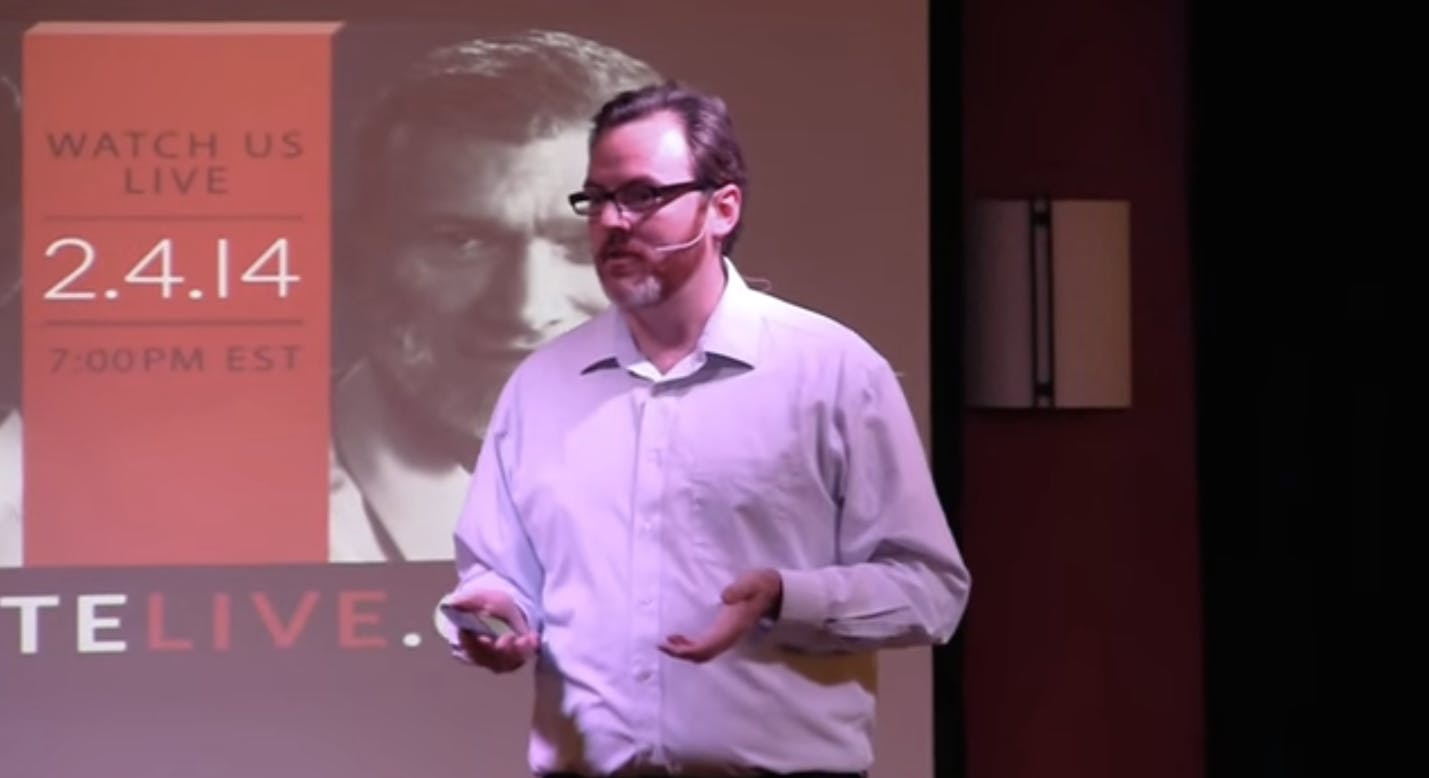 Religious science enthusiast “Science Mike” McHargue delivers a presentation on the intersection of science and faith.

In an effort to better bridge the gap between science and religion, we spoke to “Science Mike” McHargue, a Christian podcaster, writer, and thinker with a lifelong passion for science. He spent several years hiding his atheism from his family and religious community before coming back around to the Lord. He’s the first to tell you he has no formal pedigree in the field, instead describing himself as “the science equivalent of an NFL superfan. I spend incredible effort and energy to make sure I’m accurate, not to misspeak or make sensationalistic claims.” (His favorite dinosaurs are “probably the sauropods. Can you imagine the sounds of their footfalls?”)

“I had to get them to let me leave the group. They taunted me about it. It was strange.”

McHargue hosts the podcast Ask Science Mike, which sees him answer all kinds of listener-submitted questions about science, faith, and the gray area in between. “Unequivocally, dinosaurs are completely real,” he said. “They are animals that were alive and exist in the fossil record, which is a reliable way to look into the past. We also have modern descendants of dinosaurs, like birds, that point to their existence. This might threaten deeply held ideas of some Christians, but it doesn’t change very good science.”

McHargue also explained why fossils are rather uncommon, a fact that Christians Against Dinosaurs points to as evidence of human forgery. “Fossils are made in a rare process when animals die in certain conditions such that the bones degrade and bond with the surrounding material. It’s not the original material, but rock in the same shape. We have fossilized impressions of plenty other things—shells, ferns, even footprints.”

Christians Against Dinosaurs’ vigor to challenge good science has to do with the nature of religious fundamentalism, an understanding of the world in which an ancient, sacred text portrays truth and the right way to live. One of its tenets is that contemporary morality is in decline. “If you hold that position and look at increasing acceptance of evolution, that makes you think the world is moving in the wrong direction and possibly even to its end,” said McHargue. “It provides an incredible motivation to work against that.”

In the early 1990s, Chuck Smith of Calvary Chapel came up with the theory of a repeating 6-1 pattern to be found throughout the Bible. It’s most obvious in the creation story—God worked for six days and rested for one. Believing that there would come a literal 1,000-year-long reign of Christ, Smith posited the earth has been here for 6,000 years and was about due for a 1,000-year rest.

This seems to closely jibe with Auclair’s own beliefs. “It makes sense that one of God’s ‘days’ isn’t the same length as one of our own 24-hour days,” she said. “I believe we’re living in the seventh day, with God still at rest.” 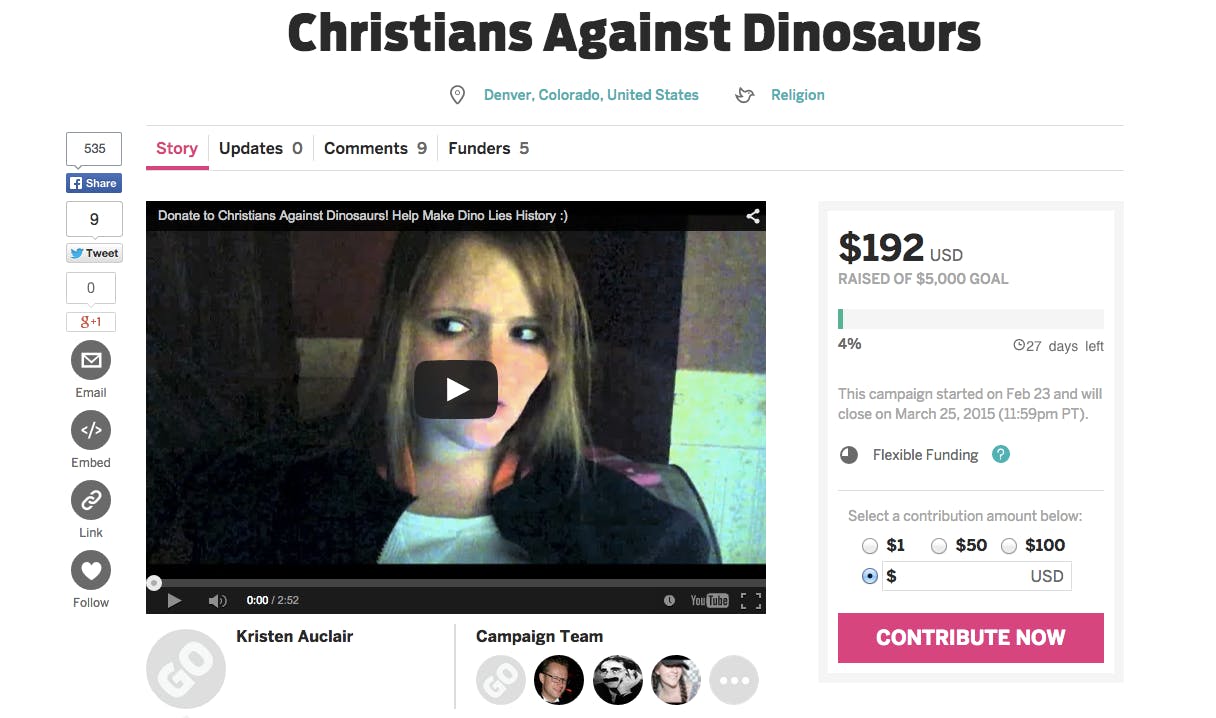 The fundamentalist group seeks to raise $5,000 on Indiegogo.

Despite unsound claims, Christians Against Dinosaurs boasts a 15,000-member Facebook group for discussing its ideas. Facebook user Rita Laura joined the group on a lark, thinking it was satire. (Her favorite dinosaur is “all of them, but triceratops ranks pretty high on the list.”)

“I mostly saw posts about liar atheists and scientists,” she told us. “They called everyone dressed in a dino costume or [who] allowed their children to be dressed in a dino costume evil.” Laura put it together that this was not satire. “I’m still struggling with that. … Are people really that dumb to not believe in dinosaurs, or is it an elaborate prank on the rest of us?” Laura had difficulty leaving the group upon her realization. “They disabled the ‘unfollow’ button, I think. … I had to get them to let me leave the group. They taunted me about it. It was strange.”

Christians Against Dinosaurs has since launched an IndieGogo crowdfunding campaign to raise $5,000 for an ad campaign to further spread its ideas. “This is a 100 percent volunteer effort. No one wants income,” said Auclair. “Personally, I’d love to see a billboard.” For a $25 pledge to the cause, backers can receive an autographed picture of Ms. Auclair.

She does not have a favorite dinosaur.