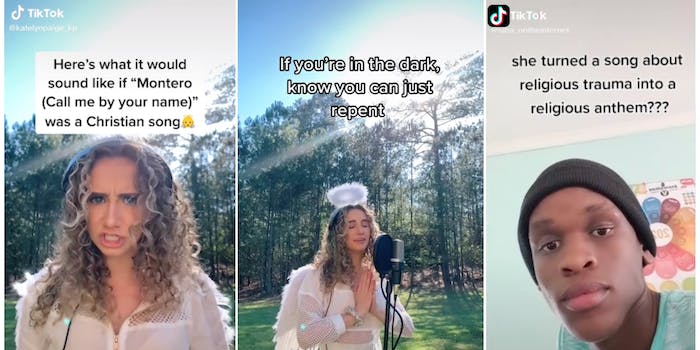 'This is a song about religious trauma.'

TikToker Katelyn Paige has released her own “Christian” version of Lil Nas X’s “Montero (Call Me By Your Name),” and it’s the exact mixture of embarrassing and disrespectful that you’d expect.

In Paige’s remix of the song, spread over two TikTok videos, she takes everything about “Montero” and flips or discards it. Replacing the song’s unnamed lover with Jesus, she exhorts people to call on his name, presenting him as the salvation they need from “living the life that is fake.” Paralleling the parts where Lil Nas X sings about his lover’s drug use, something he actually states in the song isn’t the best lifestyle despite the temporary pleasure, Paige goes on to sing about Jesus as the only salvation from the “drinking & smoking, wasting away,” which she imagines people are only doing to “numb all the pain.”

It’s actually incredible that someone could so profoundly miss the point of the original song unless it wasn’t a miss but a complete denial of it. Paige listened to a heartfelt song about a young gay person overcoming the shame and self-hatred Christianity instilled in him to embrace his true self, and she responded by saying, “no, you need Jesus.”

Even if Paige’s song wasn’t intended as a direct rebuke to Lil Nas X’s original, as her “no hate Lil Nas X” comment at the beginning of the video may be intended to convey, taking a song that so thoroughly rebukes Christianity because of the harm its caused and turning it into a Jesus bop is innately disrespectful.

So far, the song’s only redeeming feature is the duets dragging it. God bless.