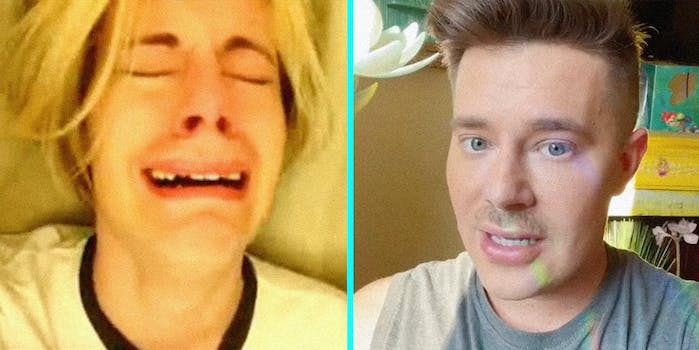 'It's about Britney's voice being heard.'

Chris Crocker, whose 2007 video defending Britney Spears after she was attacked went viral and has endured in the years since, is offering his thoughts on Spears’ emotional testimony on her conservatorship.

Earlier this week, Spears spoke publicly for the first time about the conservatorship that has controlled every part of her life and all of her assets for the past 13 years and stunned the world by detailing her experiences. Spears called the conservatorship abusive, admitted that she lied to the world when she said she was OK, and wished that she could sue her own family for everything they’ve put her through. She said that she had been institutionalized against her will and forced to take medication that made her feel like she was drunk, said she was blackmailed into working even when she didn’t want to and when she was sick, and that she was forced to attend therapy in full view of the paparazzi who humiliated her when she’d prefer to do it in her own home. Among the more disturbing allegations was that Spears’ conservatorship wouldn’t allow her to get married to her boyfriend or schedule an appointment to remove her IUD so she could have children. Spears emphasized, repeatedly, that she wanted the conservatorship to end, to be able to control her own finances, and to have her life back.

Her testimony validated the Free Britney movement, which has been calling for an end to Spears’ conservatorship for years, and Spears received and has received wider support in recent years as the media was forced to reckon with its misogynistic and harmful media coverage of Spears and other female celebrities in the early 2000s. (The New York Times and FX documentary Framing Britney Spears also played a role in that reckoning.) Naturally, Crocker’s video, which was endlessly mocked and subjected Crocker to homophobic attacks at the time, is among the things now being viewed in a different light.

Crocker, who noted that he was being asked for his thoughts about Spears’ testimony, posted his response in a new TikTok video—emphasizing that the important thing isn’t what he has to say about it, it’s what Britney Spears has to say.

“I don’t feel it’s my place to speak on it,” Crocker said. “I feel like today is about Britney being able to be heard and what she wants to say and her getting her freedom and her happiness back. It’s not about what I or anyone else has to say. It’s about Britney’s voice being heard, and that’s what I’m so happy about is she gets to be heard, no one has to speak for her. And I think all we all want is for Britney’s voice to be heard and for her to have her freedoms because that’s what she deserves.”

On Instagram, Crocker spoke more in detail about the fallout from the original video and the attacks he received even within the LGBTQ+ community and challenged the idea that he was always right about Spears.

“What’s happening now has nothing to do with if I was right or if Perez Hilton was wrong at the time,” he said. “We’ve all made mistakes in this. I don’t think one person, the same way a lot of you are saying, ‘you should’ve listened to me,’ that means we’re all guilty of something in this. And the bottom line is now, hopefully, that everyone’s to a point…the point is that, now, hopefully, as a society, we’re all able to be aware of where things are at, and that’s what’s important, not trying to retroactively clap or persecute other people.”

Since her court appearance, Spears posted a new photo to Instagram. The photo includes a quote from Albert Einstein, and in the photo’s caption, Spears references her belief that everyone wishes for a fairy tale life—even her. She also offered an apology for pretending that her life was fine when it wasn’t

“I don’t want people to think my life is perfect because IT’S DEFINITELY NOT AT ALL … and if you have read anything about me in the news this week 📰 … you obviously really know now it’s not !!!!” Spears wrote. “I apologize for pretending like I’ve been ok the past two years … I did it because of my pride and I was embarrassed to share what happened to me … but honestly who doesn’t want to capture their Instagram in a fun light 💡🤷🏼‍♀️ !!!! Believe it or not pretending that I’m ok has actually helped.”

Messages of support for Spears from other celebrities have been pouring in since Wednesday. Among them are Alexa Nikoas and Paul Butcher, who worked with Spears’ sister, Jamie Lynn Spears, on the Nickelodeon show Zoey 101. Butcher, in particular, wrote about Spears from the perspective of someone who knew her first-hand.

“She always had the kindest heart and has always had a magic about her, a light,” Butcher wrote. That magic deserves to be free to enjoy this world and truly shimmer like she always has.”

Jamie Lynn Spears, who was appointed the trustee of Spears’ trust by the conservatorship last year and is set to inherit Spears’ fortune, has yet to release a statement about her sister’s testimony. She has turned off her Instagram comments in the wake of comments dragging her for her role in Spears’ conservatorship.