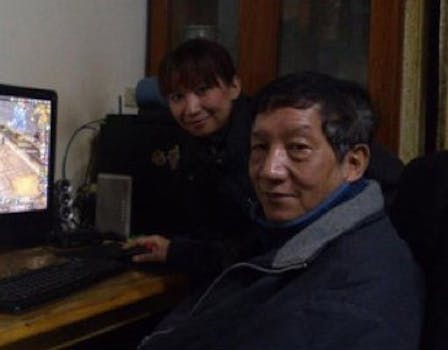 This 68-year-old Chinese man is a bigger virtual badass than you are.

What kinds of games do your grandparents like to play? Bridge? Bingo? FarmVille? Seeing how many sentences into which they can work the phrase “back in my day?”

One grandpa living in China is devoting his golden years to a different game: World of Warcraft.

According to TechWeb, the 68-year-old retiree has not one, not two, but six, World of Warcraft. characters that have reached the game’s highest level, Level 90. His high-ranking characters, which he’s been working on for most of the game’s eight-year history, range from Warriors to Hunters to Monks.

Each morning, often right after waking up, he will leave the confines of our world behind and join his fellow adventurers in Azeroth. He will also occasionally play with his young grandson, someone a bit closer to Blizzard’s target age demographic for World of Warcraft.

What’s more, his six Level 90 characters may soon be getting some company. Four of his other characters, including a thief, all rank at Level 85 or higher.

There’s no telling how exactly he will be able to control both a Level 90 Monk and a Level 90 Thief, but with hours of daily gameplay available, it’s certain that he will figure out a way to harmonize his personal team.

Although online social games are on the rise in China, particularly as a way for the country’s rapidly-growing elderly population to connect with younger generations, this grandfather’s devotion to WoW is truly unique.