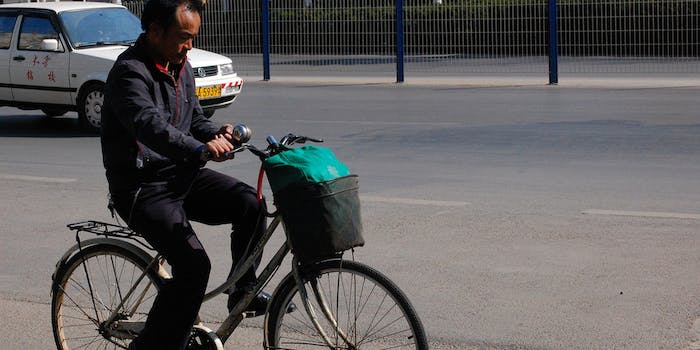 "Walk in this lane at your own risk."

The Chinese city of Chongqing has decided to accomodate its cellphone-obsessed residents rather than punishing them, designating a special sidewalk lane for these distracted pedestrians to separate them from other walkers.

The Wall Street Journal reports that the special lane, which is marked with the words “Cellphones, walk in this lane at your own risk,” opened last week in Chongqing, a large city in the center of China. The BBC calls Chongqing “a popular tourist destination,” which means that this lane may soon be clogged by gadget-wielding foreigners in addition to hurried residents.

Several comments on China’s Weibo social network reported by the Journal and the BBC reflect the Chinese people’s mixed reaction to the new urban planning decision.

The BBC flagged this remark: “Am I supposed to jump to the other side of the path when I get an incoming phone call?”

Another Weibo user, spotted by the Journal, asked, “Is the goal here to encourage still more people to use their cellphones while walking?”

The road featuring the cellphone lane is in Foreign Street Park, one of the most tourist-heavy regions of Chongqing. Another Weibo user observed with disdain that “it seems only to be serving as a tourist attraction.”

Chongqing follows in the foosteps of Washington, D.C., which in July opened a similar walking area on 18th Street for a National Geographic series called “Mind Over Masses.”

A spokeswoman for the company that introduced the Chongqing cellphone lane said that the idea was intended to mitigate the potentially catastrophic effects of this risky behavior. Speaking to CNN, she called texting while walking “an unsafe gesture with potential safety hazards.”

Photo via timquijano/Flickr (CC BY 2.0)