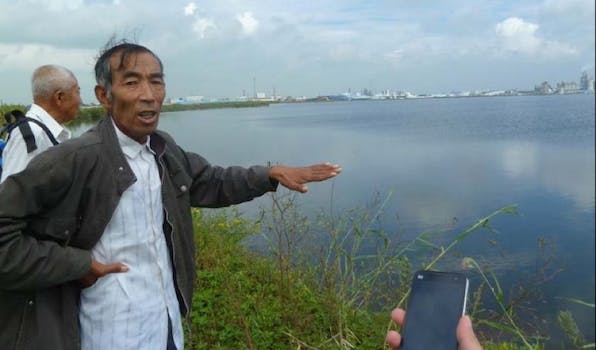 The company allegedly flooded the village with tons of chemical waste.

A Chinese farmer, in his 60s, has spent 16 years studying the law so he can carry on a legal battle with the corporation that reportedly covered his village in tons of chemical waste. The story of Wang Enlin, who only had three years of school before he began his independent legal studies, was picked up by the British tabloid Daily Mail, and it’s now going hugely viral.

Wang remembers playing cards with his neighbors while their village, Yushutun, flooded with wastewater in 2001, according to China’s People’s Daily. He blames the multi-million-dollar Qihua Group for dumping tens of thousands of tons of polyvinyl chloride into the village, ruining farmland and creating a 71-acre field covered in white calcium carbide slag.

When he tried to report the pollution, he discovered he’d have to produce evidence against the company and bring a lawsuit. After years of hanging out in bookstores, studying legal volumes he couldn’t afford to buy, that’s what he did.

With the help of a law firm, Wang and his neighbors filed suit in 2007. Somehow, the case wasn’t processed until 2015, and it wasn’t decided until this year. The People’s Daily reported on Feb. 3 that Wang and the other Yushutun residents won their first round in court, thanks largely to the evidence he spent more than a decade gathering. Qihua Group has already appealed the decision.

Wang’s story shot to the top of Reddit’s r/upliftingnews forum, where commenters pointed out that his feat was even harder than it might sound, due to linguistic and cultural challenges Americans might not be familiar with.

One commenter explained why Wang had to use a dictionary to parse his legal textbooks, word by word:

“You don’t have pinyin in most texts, especially I would imagine law text, so you won’t know what the word sounds like, even if someone said it to you already. That connection between sound and how something looks on paper is missing. Whereas you could find for example English words, without having seen it before in a book, by pronouncing the word using the alphabet as it looks, and if you heard the word in conversation you would know the meaning of the word.

In Chinese this can’t be done without pinyin under the characters. So without going to school and have someone show you the characters and what they mean, reading by yourself becomes a major task, not mentioning he is going through law books. I am so proud of this guy, major respect.

And that he was probably engaged in some heavy physical labor the whole time he was studying, because farming in China isn’t as machine-driven as it is in the U.S.:

For various reasons, there’s much less machinery involved in farming in China, which means that farmers spend a LOT more time doing manual labor (thisis an article originally from the Atlantic that touches on the subject). To truly imagine his situation, you’d need to imagine that you have to work a labor intensive job day in and day out, surviving on a paltry income even compared to the poorer half of the country.

You don’t have a computer let alone internet access, which greatly limits the amount of resource you have access to. So yeah, I’m incredibly impressed that he taught himself with only three years of formal education under such tough conditions.

It’s nice when uplifting news turns out to be even more uplifting than you assumed.