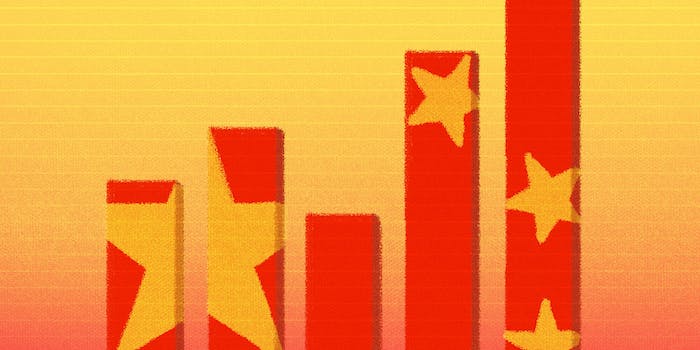 The real reason everybody should panic about #BlackMonday

No country's economy should be 'too big to fail.'

Ever since the economic downturn in 2008, there’s a palpable fear that ripples from Wall Street to Main Street whenever the stock market takes even the slightest plunge. But when that number dips down nearly 1,100 points at the start of a work week, it’s an alarming cause for those whose financial freedom and future depends on the developments—virtually everyone.

Over at BBC News, Duncan Weldon cautions against too much 2008-style panic, noting that a variety of forces signal “a stage in an ongoing process of the global economy being reshaped.” At Marketplace, Kay Ryssdal says that while China is trying to find its footing, prompted by the market, its status as the world’s second-largest economy means what happens will affect the U.S., but to a fairly limited degree. “This is not 2008. Might things get worse before they get better? Sure. Will it be scary? Quite possibly,” Ryssdal wrote. “But where we are today is nowhere near the hyper-leveraged, credit-bubblicious place we were at when Lehman Brothers went under.”

Whenever the words “Lehman Brothers,” and “2008” appear anywhere near each other in any online news story, another familiar phrase emerges: “too big to fail.” It’s a notion that’s not necessarily limited to major financial institutions, such as the ones that received major government bailouts at the start of the Great Recession—it’s one that some fear could also apply to the world’s economic powerhouses. But no country’s economy should be so big that any failure (big or small) would cause a considerable effect on all others.

These Graphics Show How The Global Markets Have Reacted Today On #BlackMonday http://t.co/qgbBe5fJqI

The comparisons to 2008 were aplenty as keen observers fixated on the market’s every move, a global shift prompted primarily by the shock devaluation of China’s currency. As Huffington Post Business notes, the Shanghai Composite dropped 8.5 percent on Monday, its biggest lost since 2007. And in the early morning hours preceding the opening of U.S. markets, #BlackMonday began trending on Twitter as Americans hoped for the best while preparing for the worst.

The comparisons to 2008 were aplenty as keen observers fixated on the market’s every move, a global shift prompted primarily by the shock devaluation of China’s currency.

CNBC’s live coverage noted the more than 600-point drop is the worst one-day fall since 2011. The Nasdaq dipped to a 7-month low, with that index along with the S&P 500 dropping by nearly 4 percent in one day. Whereas the U.S. economy bounced back in the past six-to-seven years, as CNBC highlighted, stocks in China now face rampant sell-offs. But the overall effect won’t be felt by only economies in Asia, which also took a beating on Monday, as CNN Money reports. The rest of the world, if not specific corporate sectors, will also take a considerable hit.

For example, given that much of Apple’s business functions are tied to Chinese manufacturing and consumer behavior, the company’s stock saw a 3.47-percent drop at Monday’s closing bell. As Leonid Bershidsky outlines at Bloomberg View, the tech giant may very well have a troublesome dependence on China, which accounts for more than a quarter of Apple’s revenue—and 60 percent of revenue growth—as of the beginning of June.

“Like any dependence, Apple’s love affair with China can easily become a drag on it performance if the Chinese economy settles into a pattern of lower growth and the country’s consumers become less motivated by prestige than by rational concerns,” Bershidsky wrote. “[A]nd it’s time for the company to spread its attention more evenly among geographies.” To be fair, Apple isn’t the only major U.S. company, especially in the tech sector, that could stand to lose based on what happens with China’s economy.

Bankers have caused every economic crash since the Gt Depression. The next crash will make 2008 crash look like a tea party #BlackMonday

At the start of the day, some of the most-recognized brands—including Facebook, Google, Microsoft, and Intel—saw drastic drops, with most of them recovering substantially over the course of the day. But as TechCrunch reports, with the likes of Amazon, Netflix, and Twitter still taking a hit after trading closed, tech wasn’t the only sector to feel the rub. Bloomberg Business reports that its commodities index—for industries such as oil and mining—also dropped to 16-year lows.

Even with that knowledge, it’s too early to tell what’s truly causing the stock market to behave in such a turbulent way. And nothing is off the table.

That lack of certainty is what’s perhaps most frightening, because many Americans (and others, to be sure) don’t want to relive some of the worst days prompted by what happened in 2008. The economic woes may have prompted lifestyle changes and forced people to alter their financial plans, with an eye toward holding any loss at bay and rebounding in a sustainable manner. But when a country like China prompts virtually every other economic power’s economy to drastically drop within the course of a day, it’s not unreasonable for a #BlackMonday torrent of panic to take hold.

Perhaps it’s time to think about how economic power is centralized, and the many geopolitical factors that have created and consolidated such a strong influence from the likes of China and the U.S. In a global system of haves and have nots, both countries have the two largest economies in the world. Even with the stark divides between each nation’s wealthiest and poorest citizens, both countries generally fare better than many other economies. But just as military power and political power remain critically important, economic influence can’t be understated—it’s yet another means of exercising control in ways that could be either enriching or destructive.

As Hans Kundnani wrote in April for the European Council on Foreign Relations, powers such as China appear to be using economic means for strategic purposes, within a context of interdependence. “The aim seems to be not so much to reduce interdependence, let alone to interrupt it, but to shift its balance in their own favor—in other words, to create asymmetric interdependence,” Kundnani noted. “In recent years, there has been much discussion of the way China has used investment to create such relationships of dependence through strategic investment in Africa, Latin America, and even Europe.”

With Africa in particular, as U.S. News and World Report noted in March, China has been besting the United States as it pertains to investment, with trade between China and Africa totally as much as $200 billion in 2013. As China’s slowdown began taking more of a hold in recent months, economies in African countries began feeling the pinch. In South Africa, the most industrialized country on the continent, the currency tumbled in record numbers and stocks sank last week, as Bloomberg Business reports.

Given China’s interest in commodities and raw materials, sectors that took a hit on Monday worldwide, a number of other resource-rich countries also remain highly vulnerable to what develops in the coming days and weeks. As Deutsche Welle highlights in an interview last week with a London-based economist, the China downturn could hit Africa hard.

When economic power is consolidated to the point of disparity, it creates a dangerous situation for any heavily reliant parties—a situation that comes home to roost when the relationship deteriorates.

“We find that Africa is highly vulnerable to China’s slowdown. And, in light of this, unless African economies are able to improve their trade balance with other countries, they will need to attract greater inflows of capital,” said Oliver White of Fathom Consulting, in an interview with Deutsche Welle. “We see the trading arrangement between Africa and China as having a turbulent future. The on-going slowing of Africa’s largest business partner will weigh on the economies of many African countries, particularly those whose exports to China constitute a large proportion of their GDP.”

What will become of global trading as a result of what happens in China is anyone’s guess. But it’s striking that an economy as large as China’s can trigger off such a large chain reaction in virtually every corner of the globe. In part, it’s because of the interdependence (albeit skewed and even inequitable) built into many trading arrangements, especially with the world’s largest economic powers.

When economic power is consolidated to the point of disparity, it creates a dangerous situation for any heavily reliant parties—a situation that comes home to roost when the relationship deteriorates. Undoubtedly, any drastic situation in China could be catastrophic for not only the country’s economic system, but for that of many other global economies. It’s a country that’s part of a cohort of elite powers, harboring an economy that could be considered too big to fail. And that lack of sustainability alone is enough for outrage deserved of a #BlackMonday.