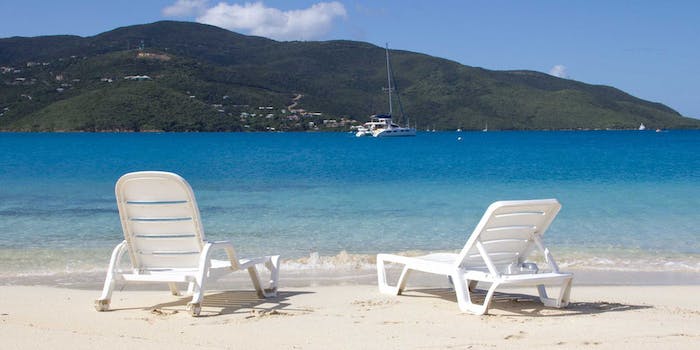 Chillin’ out with the chillest man on Twitter, @chillsitch

Here is where Twitter is getting all its chill vibes from lately.

We emailed Taylor Moore, the man behind Chill Situations a.k.a. @chillsitch a.k.a. the chillest account on Twitter, some questions about his super chill tweets. “Happy to A your Q’s,” he wrote back, “and namaste for taking the time out to rap with me.” All punctuation and grammar is sic. ;)

you can put little umbrellas in any kind of drink you want. there are no rules about that

Previously from Moore: “Sex Your Food.”

When did you start the account? What inspired it?

I was at this great little co-op cafe by the water in camden (maine, of course ;) and our apps were taking longer than usual (which is no problem by me. my main course is the view, and there’s plenty of that ;) so the server brought out a seaweed salad from the chef. they had just pulled it from the bay that dusk. I was chowing down and then boom: a jazz trio starts up on the adjacent pier. They’re playing a really laid back arrangement of “these are a few of my favorite things” from that movie. the name of the movie escapes me, but the notes coming out of that alto sax sure didn’t ;) My buddy dakota looks at me, and we’re both smiling and he says “chill sitch.” A few years later I heard about twitters and the rest is herstory.

It feels like it’s blowing up right now. Was there a point at which you felt like something sort of clicked over and things started gaining momentum?

I have a 12 year old macaw named Tillerman (after the Cat Stevens song ;) and he’s always saying stuff like “another round on me” or whistling the first few chords of “Jolly Mon”, you know, stuff he’s heard me do a lot ;) but then people started following @chillsitch and sure enough he started making the sound my 4S makes when I get twitters notifications. Ironically my notification alert is the sound non-domesticated macaws make in the wild, which is just a really beautiful squawk.

this plane is showing two movies. a league of their own and the american landscape right out your window now that’s a double feature ;)

look, @chillsitch is just like the u.s. virgin islands or the pop-up sauna at an unannounced phish show. there’s enough room for everybody ;)

all the pool toys from last year are still inflated and we only saw, like, one spider in there

I think part of what’s so appealing about the @chillsitch tone is that it’s super silly but also super earnest. Which is a little bit rare on the Internet these days! I guess this isn’t a question so much as an observation that I’m wondering about?

you can mean what you say and still say fun stuff. even when you’re dancin funny, you’re still dancin ;)

friday is my monday because takin’ it easy is my job ;)