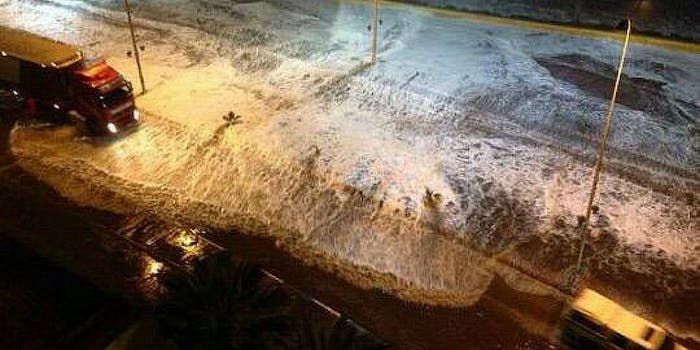 But a tsunami is no longer expected to impact the state of Hawaii.

An earthquake measured at a magnitude of 8.3 hit off the coast of Chile on Wednesday evening. Officials issued a tsunami alert for the entire 2,400-mile Chilean coast, as people in those low-lying areas quickly began moving to higher ground.

A tsunami watch has been issued for Hawaii, and the National Weather Service said, via CBS News, that a potential tsunami could reach Hawaii early Thursday morning.

Modeled tsunami travel times. The wave from the Chile earthquake will arrive in ~13 hours, or ~5 AM Thursday. pic.twitter.com/gmzgVWy56i

According to the Associated Press, one death has been reported in a town north of Santiago, the country’s capital.

The images coming in via social media showed flooding and other damage.

According to the U.S. Geological Survey, via CNN, the epicenter of the earthquake was 34 miles west of the city of Illapel, Chile, and 4.8 miles below the surface of the Pacific Ocean. The original earthquake reportedly caused buildings to shake in Santiago and other cities, including those in the neighboring country of Argentina, and three aftershocks were measured at more than a magnitude of 6.0.

This was the scene at a shopping mall in the city of Coquimbo, Chile, a coastal city that’s north of the epicenter.

This was officials trying to rescue a person trapped underneath a tree.

Australian rapper Urthboy is in Chile, and he tweeted about his experience as it was happening.

ok so that's what it feels like to experience an earthquake! #chile

7.9 on the scale, everything's back to normal within 10 mins tho

Amazing how soft the concrete felt beneath my feet.. like a 1000 trains in the subway below. Aftershocks now… whoa

According to CNN, Chile has had more than a dozen earthquakes measured at a magnitude of more than 7.0 since 1973.

Update 8:54pm CT, Sept. 16: According to the Pacific Tsunami Warning Center, via Hawaii’s KHON, a tsunami is not expected to impact the state of Hawaii.