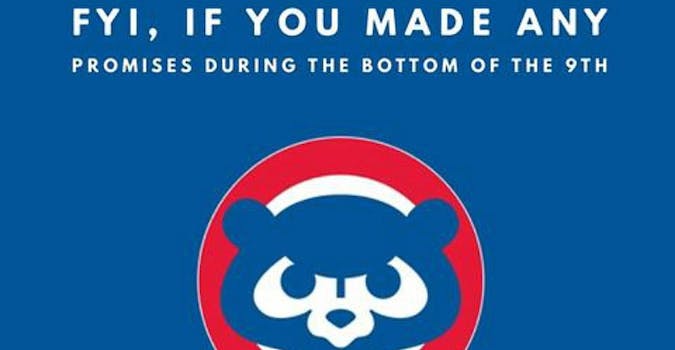 How do you tithe a World Series trophy?

Somehow, the Chicago Cubs overcame a huge series deficit to the Cleveland Indians to win the World Series this week, leading to many dick bumps and celebrations from plenty of old-timers who had been waiting their whole lives for this moment.

One theory for how the Cubs overcame the odds and ended 108 years of futility: praying to somebody or something that would lead Chicago to the victory.

Now, it’s time to pay your debts, according to one church in Springfield, Illinois.

Since the church posted that reminder on its Facebook page, it’s been shared more than 24,000 times and liked nearly 3,000 times. Compare that to the post just before it, which offered a free Thanksgiving meal but only managed to earn one Facebook share and seven likes.

Also, don’t forget about the time change, meaning you actually get an extra hour of sleep before you have to put on your Sunday best and head to Central Baptist for services. Thank God for that.