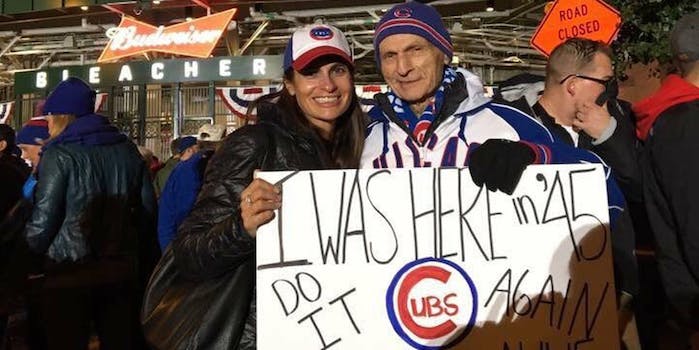 Not even Bill Murray was immune.

The Cubs didn’t simply win a World Series on Wednesday. They ended 108 years of futility. They brought together Chicago fans all over the country. They bumped dicks. They made people laugh and cry. And, perhaps most importantly, they made people remember everybody who wanted to see this moment but couldn’t.

The Cubs’ 8-7 victory against the Cleveland Indians wasn’t some normal world championship victory. It was an honor-your-relatives moment across all forms of social media—the ones who are alive to see it and the ones who aren’t.

This @Cubs win is for all the lost cubs fans over the years. For you Grandpa & Grandma.

The last time the Cubs won the World Series, my grandfather was relaying the box scores by telegraph. pic.twitter.com/6hcA23PmDJ

My Grandpa was a die hard fan never missed watching a game. He past away, never witnessed the Cubs win the World Series. This win is for you pic.twitter.com/g88MxULYKk

My great grandfather, my grandfather and my grandma were proud CUBS fans and I wish they were alive to see this. pic.twitter.com/XYni5RXyac

People are writing the names of loved ones who didn't live long enough to see this all along the Sheffield wall at #Wrigley No words, this broke my heart. Photo by Alex Nitkin #FlyTheW  #Cubs #chicagocubs #worldseries #worldserieschampions #worldseries2016 #mlb

This Cubs fan made sure to share the sweet taste of victory with his dad, who died 36 years ago.

The biggest celebrity Cubs fans weren’t immune to thinking back to their loved ones, as well.

Even the Onion made us laugh and cry at the same time with its story titled, “Millions Of Drunk Cubs Fans Rioting In Heaven Following World Series Win.”

Some old-timers, though, got to see their dreams come true.

My grandpa: 94yr old WWII vet & lifelong @Cubs fan. He gets to celebrate with tears of joy tonight #WorldSeries pic.twitter.com/EEQxotNa8i

Sports: Bridging the generation gap for at least 108 years.