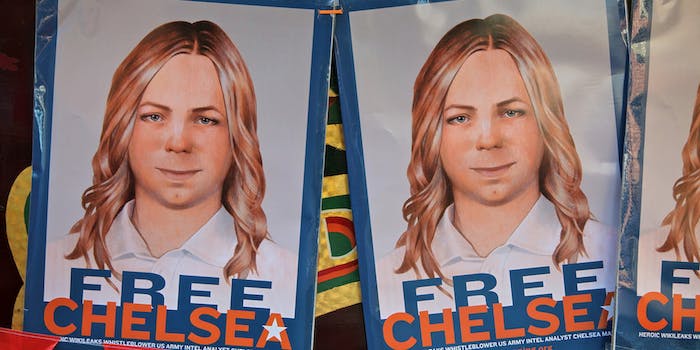 The controversial whistleblower is just as important as she was 18 months ago.

Last week, convicted Wikileaker Chelsea Manning created a Twitter account and gave her first interview from behind bars. Usually, after people who are famous get sent to prison, they have a habit of disappearing from the public consciousness for a while (anyone think about O.J. Simpson lately?), but Manning has reemerged as a public voice.

But while Manning may not be as newsworthy as she was 18 months ago when she came out as transgender after the conclusion of her trial, the issues she is associated with, and continues to be a nexus for, have never been more relevant.

Whether she is a patriot or a traitor, a hero or a villain, she lies at the center of a number of significant issues, ones we should continue to discuss.

At this point there is virtual unanimity in the medical community that transition specific medical care for transgender people meets the definition of “medically necessary.” However, the issue is still being judicially decided. While the Department of Defense relented in their position and finally agreed to give Manning access to Hormone Replacement Therapy (HRT), courts are still deciding whether transgender specific medical care must be provided under the Eighth Amendment.

Previous cases have established that prisoners must receive medically necessary care, but courts are still deciding whether transition-related care is legally necessary. Some have followed the advice of medical experts, while others have accepted testimony from religiously motivated fringe people within the medical community and have decided against it.

Still, Manning’s medical care brings up a vital question: If transition related medical care isn’t medically necessary for prisoners protected by the minimalist standards of the Eighth Amendment, who is it necessary for?

2) How we treat transgender prisoners

For transgender prisoners, horror stories of rape, assault, HIV contractions, long term solitary confinement, and denial of care are rife. Detained transgender immigrants face conditions that may be even worse. The statistics themselves flesh out the narrative: Transgender people are at exceptionally high risk when incarcerated. While the public often sees prisoners of all stripes as “getting what they deserve,” the simple truth is often “walking while trans” is enough to get you arrested.

How we treat our prisoners says a lot about who we are. While Manning may be receiving marginally adequate treatment, most other transgender prisoners are not.

When Chelsea Manning was tried, she had both a military and civilian legal team. Progressives rallied around her, and Amnesty International decried her detention. She has also had the support of the American Civil Liberties Union and other legal organizations. The military has mistreated her with solitary confinement but has not allowed her to come to physical harm in prison (that we know of). The U.S. Army even ordered that she be addressed by her legal name and preferred gender.

This is in stark contrast to the treatment that CeCe McDonald, Ashley Diamond, and Eisha Love—transgender women of color—and Ky Peterson—a transgender man of color—have received as prisoners. Diamond suffered rape, denial of medical care, denial of her identity, and HIV infection as a result of being raped. Peterson’s defense “team” consisted of one overworked marginally competent public defender who couldn’t even remember what plea bargain they agreed to or remember that Georgia has a “stand your ground” law.

McDonald, Diamond, and Love were all sent to prison for fighting back against people trying to kill them. Chelsea Manning’s crime happened in a far more gray space. In a world where race didn’t matter, Manning would seem the least sympathetic figure among them. However, we don’t live in that world, and race still matters.

When the Wikileaks documents were released, as well as the video image of an AH-64D Apache engaging a van with children in it, it shone a harsh light on what the U.S. is willing to do in the name of fighting the war on terror. There is a high degree of separation between American civilian and military culture, and this illustrated it in a way that made people deeply uncomfortable.

In December 2014, a poll by the Associated Press showed that 50 percent of Americans agreed that the use of torture could be often or sometimes justified. This closely follows a 2011 poll where 53 percent agreed that torture was justifiable, while only 42 percent said it could only rarely be justified or not be justified at all. The support for the use of torture has been trending upward after 9/11. These trends may be a result of the steady drum beat by Fox News that torture provides usable, actionable intelligence.

The truth is that torture yielded little to no useful intelligence after 9/11. The DoD’s own manuals on interrogation state the obvious: Torture is unreliable and counter-productive because people will tell their captors they think they want to hear just to make the torture stop.  The U.S. population is apparently more willing to believe Sean Hannity than actual experts on matters of both morality and national security.

5) Do we really want a war with Iran?

No matter your opinion about her, it’s impossible to not see that Chelsea Manning leaked information that demonstrated some of the ugly, wasteful, truths about U.S. involvement in Iraq. For whatever reason, though, some leaders in the U.S. seem intent on going to war with Iran, a country that has twice the population, a functional military, and an enduring hatred of American interference.

Right-wing politicians, and freshman Sen. Tom Cotton (R-Ark.) in particular, seem eager to go ahead and use airstrikes against Iran’s nuclear facilities. This position ignores the DoD’s own assessments that such a strike would only be a temporary setback, and former Secretary of Defense Gates’ observation that, “If you think the war in Iraq was hard, an attack on Iran would, in my opinion, be a catastrophe.”

While Manning may not have been the most easily digestible messenger to the public for the idea that “war is hell,” it doesn’t make the point any less valid.

Maybe we should listen.