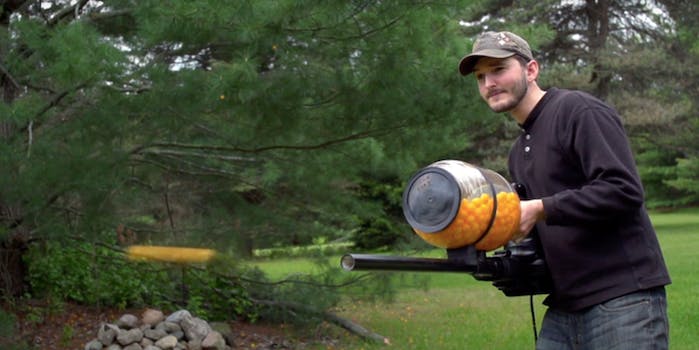 Dude builds a cheese ball machine gun, and so can you

Ever wonder how to make snacking even more extreme? Just turn to this guy for some inspiration.

YouTuber NightHawkInLight constructed a cheese ball machine gun after getting a viewer request more than six months ago. Made from a converted leaf blower, the machine blasts the orangey orbs into the sky. I’d probably react to getting shot by one of these cheesy snacks in two ways: first, ouch, those things probably hurt, but then you can pick up the cheese balls for a salty snack.

The video showing off the contraption also serves as a guide on how to build your own.

Meanwhile, one guy in the comments of the video suggests swapping out the cheese balls for jawbreakers. Now, that’ll definitely hurt.

And if you aren’t feeling DIY, you can just watch the footage of the machine gun going off. Warning: You’ll likely be craving cheese balls soon after.