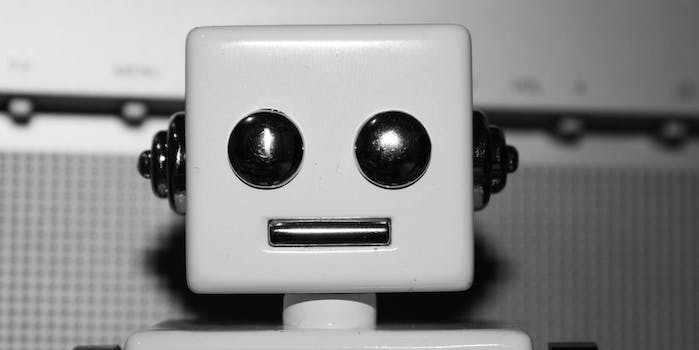 Chatbots are the future of advertising

How may I help you?

Chatbots are the future—the future of advertising. Soon, we’ll be “chatting” with them all the time, at least if Facebook’s recent announcement of DeepText is any guide to the years and decades ahead.

In case you missed it, DeepText is a machine-learning, natural language-processing engine that will mine the social network’s vast stores of status updates and inflammatory comments for the keys to coherent human speech. It joins Google’s SyntaxNet and Microsoft’s ill-fated Tay in the quest for a convincing conversational robot that can absorb everything we say to each other online and then spit it back at us according to context.

In many ways, these are all exciting technologies, with each promising to make web browsing easier at the same time as bringing us closer to an AI that could pass the Turing Test. However, somewhat depressingly, they all seem geared towards one end, and one end only: Making advertisements appear as if they’ve come from another human being.

This is the primary goal of all so-called chatbots, despite claims that their ultimate objective is to engineer “conversation as a platform,” as Microsoft CEO Satya Nadella put it recently. Contrary to Nadella’s description, the desired endpoint is not so much to make an operating system that’s operated solely by speech, as it is to superimpose a personable, human veneer over what is otherwise a decidedly impersonal, faceless user interface. The goal is to create the illusion that we’re dealing, not with computers and corporations, but with another person, a friend we can trust.

The goal is to create the illusion that we’re dealing, not with computers and corporations, but with another person, a friend we can trust.

This goal is evident in a recent profession from Ray Kurzweil, of The Singularity Is Near fame. As a director of engineering with Google, he revealed last month that he and his team are “working on chatbots,” and that, in the future, people will be able to personalize their bots by feeding them their own posts, thereby allowing said bots to imitate their “style, personality, and ideas.” If nothing else, this statement manifests how the aim of the chatbot is to deceive its user into thinking that she’s dealing with someone (or thing) just like her, even though she’s merely being sold a regurgitation of her own words.

It’s this regurgitation of one’s own words that raises doubts on whether we’ll ever really “chat” with robots. DeepText, for example, is learning the structure of ‘natural language’ by parsing the 400,000 new posts added to Facebook each minute. It is, in other words, learning to reproduce Facebook-English or Facebook-Spanish rather than English or Spanish as these languages are actually spoken IRL. Basically, it’s providing Facebook users with a re-combined copy of what they’ve already said on the social networking site.

This is all well and good as far as it goes, yet regardless of how successful it might be in mining and reproducing Facebook’s data, DeepText won’t ever power a chatbot that talks as you and I talk.

To use a piece of philosophical jargon for a second, this is because it lacks subjectivity, a changing perspective on life that comes from having experiences, goals, preferences and sentience. It’s such a subjectivity that’s the most fruitful source of convincing, human-like speech, and not the ability to take what someone has already said and repeat it back to them at a more-or-less appropriate moment. Without it, any “conversation” a chatbot engages in will not only be short of spontaneity, variety and novelty, but will also be one-sided, in that the bot will do little else besides responding to its human interlocutor’s utterances.

It will be an answerbot, not a chatbot, a shortcoming which brings us to what such bots are really about.

It’s clear that their primary role will be as a kind of human face or mascot for their parent company, a route towards distracting us from the fact that we’re interacting only with a corporation, and not with an empathetic human being. Just like the Facebook Messenger bots rolled out in April, many chatbots will function to infiltrate the conversations and activities we conduct online, monitoring them for keywords so that they can intervene with a suggestion to book a taxi or watch some NBA highlights. They will be direct advertising-bots, hiding behind a facade of human-level, “natural” conversation in order to disguise just how intrusive and fiscally motivated they are.

In many way these bots are the culmination of a long-standing tradition in advertising and marketing.

Intrusive and fiscally motivated they may be, but in many way these bots are the culmination of a long-standing tradition in advertising and marketing.

Given that they’ll absorb the language of our own posts and spew it back at us in the pretence of addressing us as personally and as individually as possible, they’ll stand proudly as the logical conclusion of a marketing tactic based around creating the illusion that advertisements “speak directly to” the individual consumer. They literally will speak directly to the consumer in this case, although the impression of such direct speech will be undermined by the knowledge of two things: That they’re nothing but code engineered to reproduce certain kinds of output when we ply them with certain kinds of input, and that their main function is to linguistically appropriate our culture and effectively sell this culture back to us.

Still, in their ability to approximate human speech, they’ll provide the advertisers and marketers with another big advantage. That is, surveys have consistently shown that the most trustworthy form of advertising is word-of-mouth recommendations from people we know.

These bots will essentially simulate word-of-mouth recommendations, tapping into their power to reassure us into purchasing a particular car or detergent. This is perhaps the chatbot’s masterstroke, and already Facebook has begun recognizing it by selling “sponsored messages” to businesses wishing to exploit the potential of the bot for financial gain.

Such messages represent the future of these bots, which are still very much in their infancy. Sooner or later, they’ll be inserting product placement into our online browsing whenever an opportune moment arises, doing so in an apparently seamless and unobtrusive way that aims to coax us into thinking we’re being helped by a friend. Of course, we may indeed end up being helped by them when looking for a restaurant or gym, yet even if they anesthetize the gnawing feeling that we’re just sitting alone with our computers or phones, their sole and primary achievement will only ever involve making it easier for us to part with our cash.

This is their bottom line, their raison d’être: Heightening the extent to which Facebook, Microsoft or Apple pretend to be our best buds while making money out of us. In fact, if you want proof of this, try asking one of the commercially available chatbots right now. Maybe, just maybe they’ll provide you with an interesting answer.

Simon Chandler is a music and literary critic and a news-tech-political commentator contributing to the likes of WIRED, the Morning News, Left Foot Forward, Alternet, and Truthout. He write music articles for Tiny Mix Tapes andThe 405, and literature reviews for Electric Literature, Full Stop, and The Kenyon Review. Follow him on Twitter @_simonchandler_.