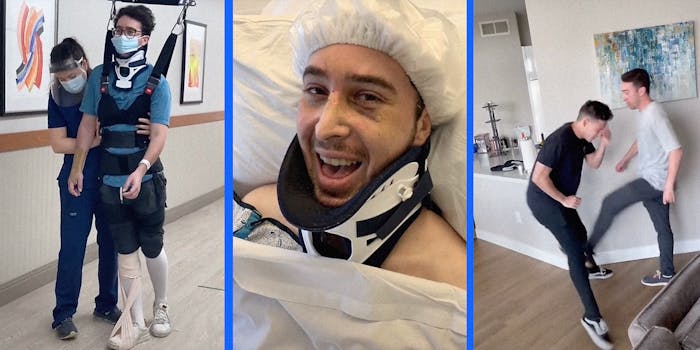 After being paralysed in a traumatic accident, this TikToker documented his road to recovery.

TikToker Chase Gets Better experienced a life-changing injury this year, paralyzed from the shoulders down after a traumatic accident. Facing a long road of recovery, Chase’s friend Dan offered a unique incentive. Once Chase regained the use of his legs, he was permitted to kick Dan in the balls. Thus began an epic journey, documented on TikTok.

Posted last week, this TikTok covers several months of Chase’s recovery, including footage of him relearning how to walk during rehab. His physical therapists helped him tailor his recovery around regaining the right strength and balance to kick Dan in the balls. “His left leg has way more force than I was expecting,” one of his therapists explains.

In Part 2, Chase leaves the hospital and Dan prepares himself for a kicking. A heartwarming finale to a weirdly comedic tale of pain and recovery.

That is some very powerful bro energy.