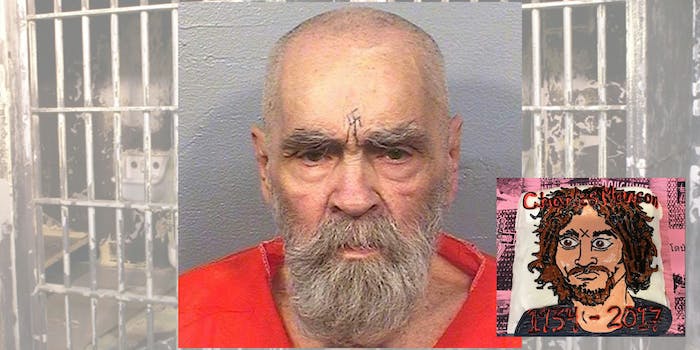 Photo via California Department Of Corrections And Rehabilitation/Wikimedia Tess Cagle

People think this Charles Manson donut is in bad taste

The company turned the serial killer into a donut,

Throughout the year, Portland, Oregon’s famous Voodoo Doughnut has honored celebrities who have died—including Prince, Tom Petty, and Fats Domino—by immortalizing them as a delicious donut.

But customers say the business crossed the line with a donut honoring Charles Manson, the cult leader and criminal who died on Sunday.

The donut shop tweeted an image of their concoction on Monday along with the comment, “Not celebrating. Villains die too.” The tweet was deleted after the company received an influx of “WTF???” messages.

Twitter users pointed out it was insensitive of the business to commemorate the death of a man responsible for killing at least seven people and compared the Manson donut to celebrating Hitler.

@VoodooDoughnut you might want to rethink about having a donut named after a cult leader and white supremacist who wanted to start a race war back in the 60’s. It’s really in bad taste. I really hope the families of the victims can finally have peace. #charlesmansonisdeadparty https://t.co/CiKd2NnF3L

Since this apparently what we are doing, can we get a 8 1/2 month pregnant Sharon Tate stabbed 16 times tribute cake? Have we celebrated Hitler’s birthday yet? Stalin was a nice guy too while we’re at it. https://t.co/fokdx8qy42

You are seriously disturbed. I guess Dahmer was a folk tale and you believe Elvis is still alive? Tell the families of his victims who prayed for his soul after 30+ years of torment that he Manson was a saint. Lord help you!

Since deleting the tweets, Voodoo hasn’t made any additional comments about the donut. On Tuesday it shared its newest pastry—this one in honor of David Cassidy’s death.

It’s unclear if the Manson donuts remained for sale or were trashed.