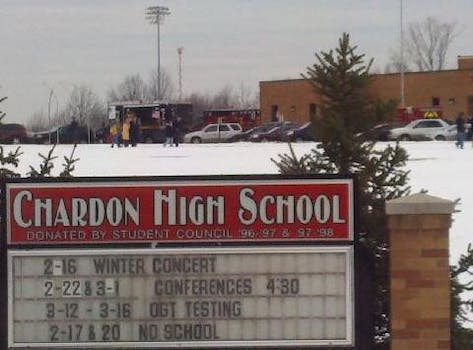 In a time of crisis, students at CHardon High School turned to Twitter to update family and friends, after a gunman fatally shot one student and wounded at least four others.

At least one student is dead after a shooting Monday morning at an Ohio high school, leaving thousands of students and community members to search Twitter for answers, comfort, and support.

Before 8 a.m. EST, police received reports of shots fired inside Chardon High School in Chardon, Ohio, reported MSNBC. At least five students were shot before the lone gunman, “believed to be a 17-year-old student,” was taken into custody by police, reported CBS News.

According to the Daily Beast, the suspected shooter is student T.J. Lane, who wrote a violent Facebook letter on Dec. 30, 2011. The letter reads like a piece of fiction set in a world called a “sandbox for all the wretched sinners.”

Like the recent shooting at Virginia Tech, the Chardon High School episode turned ordinary students into citizen journalists, tweeting live updates from within the school. While these updates have proved invaluable for the mainstream media, high-intensity situations like these can lead to errors and speculation. For example, about two hours ago, @Young_Joob tweeted three alleged photos of Lane holding a knife and two handguns.

Here’s a look at some of the tweets from Chardon High School students. Storify compiled by the Daily Beast.