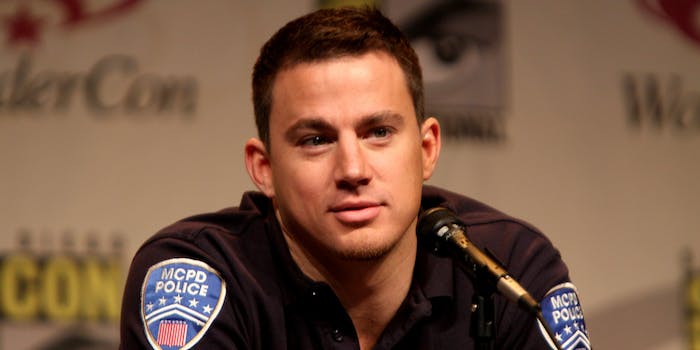 All hail the king of the bros.

But when you learn that Magic Mike himself is signing on to Reddit to answer a few questions about his upcoming sequel and, like, anything under the sun, you know you’ve got a fun hour ahead.

Channing Tatum, the dude every dude would like to be friends with, did an AMA on Wednesday to talk about Magic Mike XXL and bring focus to an Omaze campaign benefiting the Runa Foundation, a nonprofit that aims to preserve and support farming communities in the Amazon.

Kicking off my 1st #redditAMA in 30 minutes! Got questions? See you guys at 2pm PT. Be gentle. https://t.co/lz7e6mEXEw pic.twitter.com/kTShP6fSjw

While he did seriously talk about his belief in the golden rule, the awesomeness of his friends Jonah Hill and Chris Pratt, and his overall gratitude for his success, most of the conversation drifted to things that only solidified Tatum’s claim to fame of ultimate bro-dom. In case you missed it, let us break it down for you, starting with an excerpt from his welcome message:

Look, I could sit here and tell you how great the cause is, and if that’s interesting at all there’s information about it and you can go find that. But to be honest, I can promise you that these premieres can be super-lame, but the Magic Mike premiere will be the most fun you will have at one of these things. It’s pretty much all of the cast how we hung out on the movie, and we’re all really good friends, and there will be a ginormous stripshow after the premiere. If you’re into that.

On the subject of solitary island living:

Question: You can only bring three things to an island for the rest of your life. What are they and why?

Tatum: How about a magical seashell that’s always filled with bourbon. And I would like a magical palm tree that had a lot of shade with instead of coconuts there’s just peanut butter jelly sandwiches with cheetos underneath. And my wife that is always happy and possibly naked.

On the amazing qualities of actual shit:

Question: Have you done anything recently that made you think, “I can’t believe I did that?!”

Tatum: I just went to Iceland and tried to do a small expedition across the glacier and we didn’t make it. We had to be emergency evacuated as there was a white out blizzard which I got to take a poop in. It actually freezes before it hits the ground.

On his idea of fine cuisine:

Question: Channing! The world has gotta know, what are the components of your perfect sandwich?

bread, white. peanut butter, not crunchy, creamy. grape jelly, double portion, more than you think should actually fit on a piece of white bread. bread. and then some cheetos shoved in there, and then you’re good to go.

On his idea of fine cuisine, part two:

Question: Hello Channing Tatum! This is something I’ve always wanted clarified since it happened…were you ever in Sea-Tac airport at the Chili’s restaurant looking for a beer but IDless? I was the one working there who had to make the difficult decision as to whether we could serve you or not.

It all ended with a picture of you giving each of us a peck on the cheek, myself included. It’s still one of my favorite stories to tell so I hope I wasn’t just duped by a very convincing look-alike.

Tatum: That absolutely was me. Because I love Chili’s. And no one believed me that i got into an airport without my id. I just wanted a beer and some chicken crisps, and i actually couldn’t get either of them for a while, because i remember you guys didn’t have chicken crisps either! what’s a Chili’s without chicken crisps?

On how to keep a lady by getting killer abs:

Question: My fiancé says if I don’t have a body like yours by next summer, she’s leaving me. Any pointers for a sweet six pack?

Tatum: If you have to have abs for her to stay with you, might be a sign for you to reevaluate how much she loves you. I don’t know. Running dawg. Running and situps.

And of course, regarding his penis:

Question: Does your penis have a nickname?

It’s settled. Tatum is king of the bros.