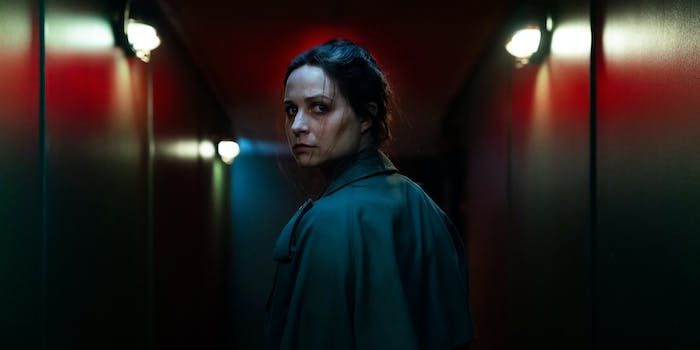 A biting commentary on trauma and what we try to edit out of our lives.

Censor, Prano Bailey-Bond’s feature directorial debut, takes us back to the ’80s-era U.K. when the moral panic over gory horror films known as “video nasties” led to the censorship of dozens of horror films. Using the VHS and editing medium (and its many warps) to great effect, Censor is a smart commentary on the nature of censorship and the traumas we try to self-censor that would fit right in with ’80s horror.

Enid’s (Niamh Algar) heart is in the right place. As a censor, her job is to watch these horror films day after day and suggest edits on which shots should be removed or edited because they’re too violent, too gory, too gratuitous, too realistic. (It’s the kind of work that sparks actual debates about, for instance, how much eye-gouging a movie should show or if it’s so unrealistic that it should slide.)

It’s a thankless task that Enid takes very seriously, and as she explains, “I do it to protect people.” It’s one with very little reward: Do her job correctly and she’s given shit for being too uptight about her meticulous suggestions; do it incorrectly and the country just might lay the blame for a murder allegedly influenced by an approved video nasty at her feet.

Enid regularly stays late at the office, offers to type up a colleague’s notes so she’s able to get to her evening plans, and doesn’t have much of a social life outside of her work. And while she still sees her parents, even that is a mixed bag. Her parents finally had Enid’s sister Nina declared dead several decades after Nina went missing to finally give themselves closure; Enid, who was the last to see Nina alive, still can’t remember what happened that day, and her attempts to do so over the years have only caused further heartbreak.

She initially seems ready to move on as well, but her job won’t let her. One of the films she’s tasked with censoring is so eerily reminiscent of the day her sister disappeared that she becomes physically ill. In effect, it opens the wounds right back up again as Enid is left to ponder a multitude of possibilities. Is Nina’s killer still on the loose? Does the director of this particular video nasty know what happened to her? Or is Nina still somehow alive after all these years?

“You’d be surprised what the human brain can edit out when it can’t handle the truth,” one of Enid’s colleagues tells her. Bailey-Bond plays around with these ideas and never giving us easy answers upfront. It’s warping with Enid’s own perception of reality, captured brilliantly by Algar, and while Censor loses steam even as it heads into its wild final act, you can’t help but be compelled to watch, uncensored and all.

Censor is now out in theaters. It will be released on VOD on June 18.