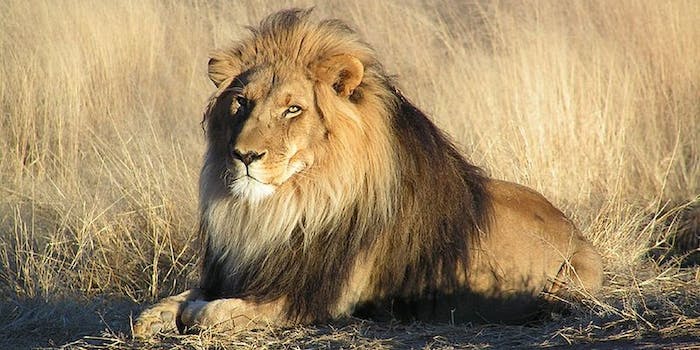 'His message is profound.'

The Internet erupted in every way possible when news that Cecil the Lion had been slain by an American dentist. But while everyone was busy sorting out their feelings and opinions on the situation, one animal psychic was going straight to the source: Cecil himself.

On Wednesday, Karen Anderson-Animal Communicator, reportedly made contact with the lion from the afterlife and posted his message to Facebook.

His message reads as so:

“Let not the actions of these few men defeat us or allow darkness to enter our hearts. If we do then we become one of them. Raise your vibration and allow this energy to move us forward. What happened does not need to be discussed as it is what it is. Take heart my child, I am finer than ever, grander than before as no one can take our purity, our truth or our soul. Ever. I am here. Be strong and speak for all the others who suffer needlessly to satisfy human greed. Bring Light and Love and we will rise above this.” 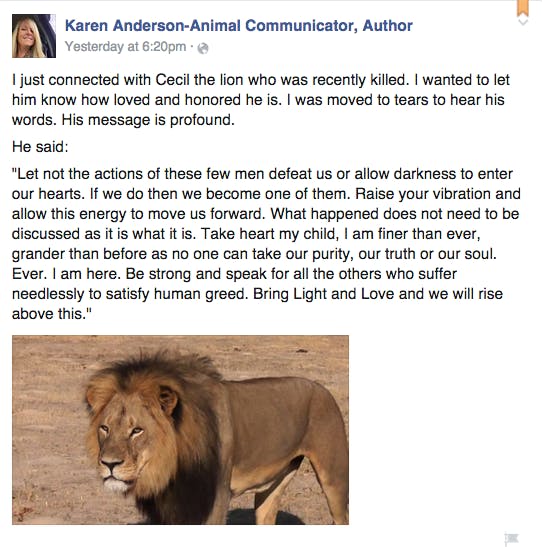 It looks like Cecil wants us to move past this, to put the actions of the wretched men that took his behind us. Which are truly gracious and wise words from the beautiful beast.

Anderson’s about page reads, “Connecting you with all animals, living or deceased as well as departed human loved ones. What messages await you?” She also has more than 6,000 Likes on the page and a 4.8 out of 5 stars review.

People have also left her positive testimonials. The latest reads as so:

Karen is Amazing a few years ago I experienced the tragic loss of my cat Paddington i feel that we have more than one soul mate and they come to us in all different forms Paddington was one of those soul mates when he passed i felt alone, lost and was in the deepest state of grieving I had ever experienced until i discovered Karen while looking for support groups online i scheduled a session with her and the things that she knew baffled me they were things only known to Paddington and myself because of Karen I now know beyond any doubt with my whole heart and mind that life does not end with the death of the physical body it is simply transformed the soul energy can not die. That is a beautiful gift. The relief of knowing that Paddington was still very much with me allowed me to begin the healing process. Karen is much more than a Pet Psychic, Animal Communicator and Medium she is a Soul Healer.

So did Anderson really talk to Cecil? It’s unclear, because it really does look like she has some mystical powers. But based off her reviews, it’s highly probable.