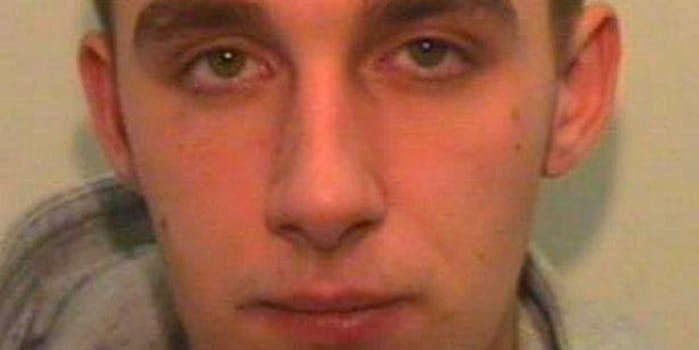 "Catch me if u can," fugitive Sam Greenwood posted on a police department Facebook page. They did.

The Zodiac killer, who terrorized the San Francisco Bay area in the late 1960s, is perhaps best remembered for the way he taunted police with a complex and puzzling series of clues. His bizarre cryptograms, laden with the zodiac symbols that would inspire his moniker, successfully confounded police who were never able to catch him.

Not everyone is as good at this.

Recently, a British fugitive was caught within hours of teasing the police on their Facebook page, challenging them to “catch me if u can.”

No, Sam Greenwood of Rochdale, U.K., will not go down in the annals of history as a criminal mastermind capable of outwitting the police. The 19-year-old, wanted for violating the terms of his early release from jail, lacked the cunning and guile of other criminals who famously left “calling cards” for the police. In an act of foolhardy bravado, he went straight to the Greater Manchester Police Rochdale North Facebook page, CNET reports, to issue his challenge to law enforcement officials.

Even the Wet Bandits weren’t quite so dumb.

Police responded to Greenwood’s challenge promptly with another Facebook post: “You are a talented young man. Don’t waste your life away. So many people are willing to help you — but you’ve got to start helping yourself.”

Greenwood was apprehended 12 short hours later, while walking down the street, without incident. Not exactly going out in a blaze of glory like Bonnie and Clyde.

Having met far less than their match, the Rochdale Police couldn’t help but do a little taunting of their own after Greenwood’s arrest.

“Caught you. Do not pass Go, do not collect £200, go straight to jail,” the Rochdale Police wrote and later deleted.

So Greenwood will not get to join the ranks of those famous fugitives who fought the law and won. Instead he joins the long line of other small time crooks who got tripped up by Facebook and the growing social media presence of law enforcement agencies.

Such criminals include the Brower Boys gang of Brooklyn, N.Y., who saw their year-long burglary spree come to an end after a police officer friended one of the gang members and spotted them bragging about their crimes.

There was also the case of Michael Ruse, who testified his innocence of assault charges in an English court, only to go home and brag “I think I get [sic] away with it” on Facebook.

If criminals can learn anything from these stories, perhaps it’s to always wipe away fingerprints, never return to the scene of the crime and install Cold Turkey on their computers.